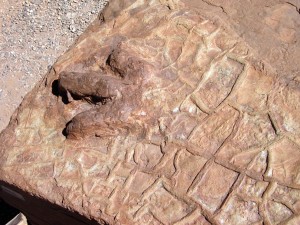 This natural cast of a Eubrontes dinosaur track was discovered at the St. George Dinosaur Discovery Site. The box-like lines are natural casts of mud cracks. 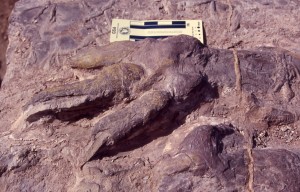 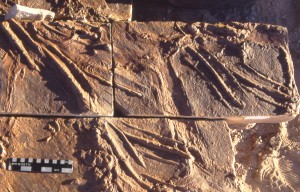 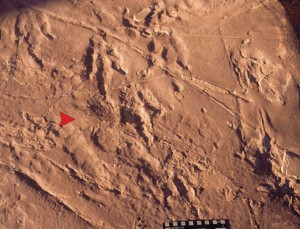 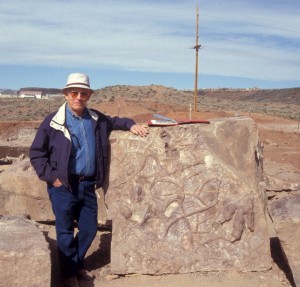 Two hundred million years before humans flocked to southwestern Utah, dinosaurs were hanging out and enjoying this area. Thousands of dinosaur tracks and other fossils found here tell the story of dinosaurs walking, running, crouching, swimming, wading, and fishing while living near the shores of a large ancient lake, named Lake Dixie.

While leveling land on his property in February 2000, Dr. Sheldon Johnson discovered bumps on the underside of a large block of sandstone he was moving. Instead of the usual indented dinosaur tracks (impressions), these looked like the actual dinosaur feet, and were in fact, well-preserved 3-D casts of dinosaur footprints. Many of the casts at the site show detailed skin impressions, foot pads, claw marks, and dew claws.

After this initial discovery, abundant fish, plant, trace, and invertebrate fossils, rare dinosaur teeth and bones, and thousands of additional tracks made by a number of different track makers were identified.

To preserve these world-class dinosaur trackways for scientific and educational purposes, Dr. Johnson and his wife, LaVerna, donated the tracksite to St. George and worked with the city, local businesses, federal and state governments, and paleontologists to create the on-site museum. Hundreds of thousands of visitors and paleontologists from all over the world have visited this remarkable site to learn how dinosaurs walked and behaved.

Nearly 200 million years ago (Early Jurassic time), Lake Dixie was a large, freshwater oasis attracting dinosaurs to its water’s edge with its abundance of large fish and shores of edible plants.

Ripple marks and mud cracks found in the sandstones and mudstones of the Moenave Formation indicate that the beaches and mudflats along the shoreline of Lake Dixie were periodically submerged. As dinosaurs and other creatures walked in the mud, they left footprints, which were then quickly filled in with silt and sand, preserving the fine details of the impressions. These later hardened into stone and became track casts.

Just offshore, dinosaurs swam and fished. The dinosaur swim tracks at this site are currently the world’s largest and best-preserved assemblage, and helped end the controversy among paleontologists over what these kinds of marks represent. Large serrated dinosaur teeth have been found at the site with a distinct wear pattern, indicating dinosaurs may have eaten large fish covered in heavy, enamel-covered scales.

Trackways, footprints, tail drags, and burrows are all examples of trace fossils or ichnofossils (fossils without any physical body parts) that provide evidence of an animal’s actions and behaviors. The majority of dinosaur tracks from the 25 track-bearing layers within the Moenave Formation are from two types of tracks, Grallator and Eubrontes.

The more common track, Grallator, is a 4- to 8-inch-long, three-toed print, probably belonging to a slender, meat-eating dinosaur such as the 10-foot-longMegapnosaurus. Eubrontes, a larger 13- to 18-inch-long, three-toed print, is thought to be made by a large meat-eating dinosaur such as the crested Dilophosaurus, which grew up to 6½ feet tall and 19 feet long, and weighed 900 pounds. Many, small nondinosaur tracks have also been found, including those of ancient crocodilians and horseshoe crabs.

One important discovery is a Eubrontes trackway displaying extremely rare crouching and tail drag traces. It shows the dinosaur first sitting on the ground, then lumbering forward and sitting down again. Later as the dinosaur continued on its way, climbing up a sand bar, its tail scraped the ground as it walked leaving drag marks along the trackway.

If traveling on I-15 from the south, take exit 6 (Bluff Street) in St. George, then turn east (right) onto Riverside Drive. Continue on Riverside Drive for about 3.5 miles until you reach the museum located on the south (right) side of the road at 2180 East Riverside Drive.

For current exhibit and other information, visit the St. George Dinosaur Discovery Site at Johnson’s Farm website at www.dinosite.org.