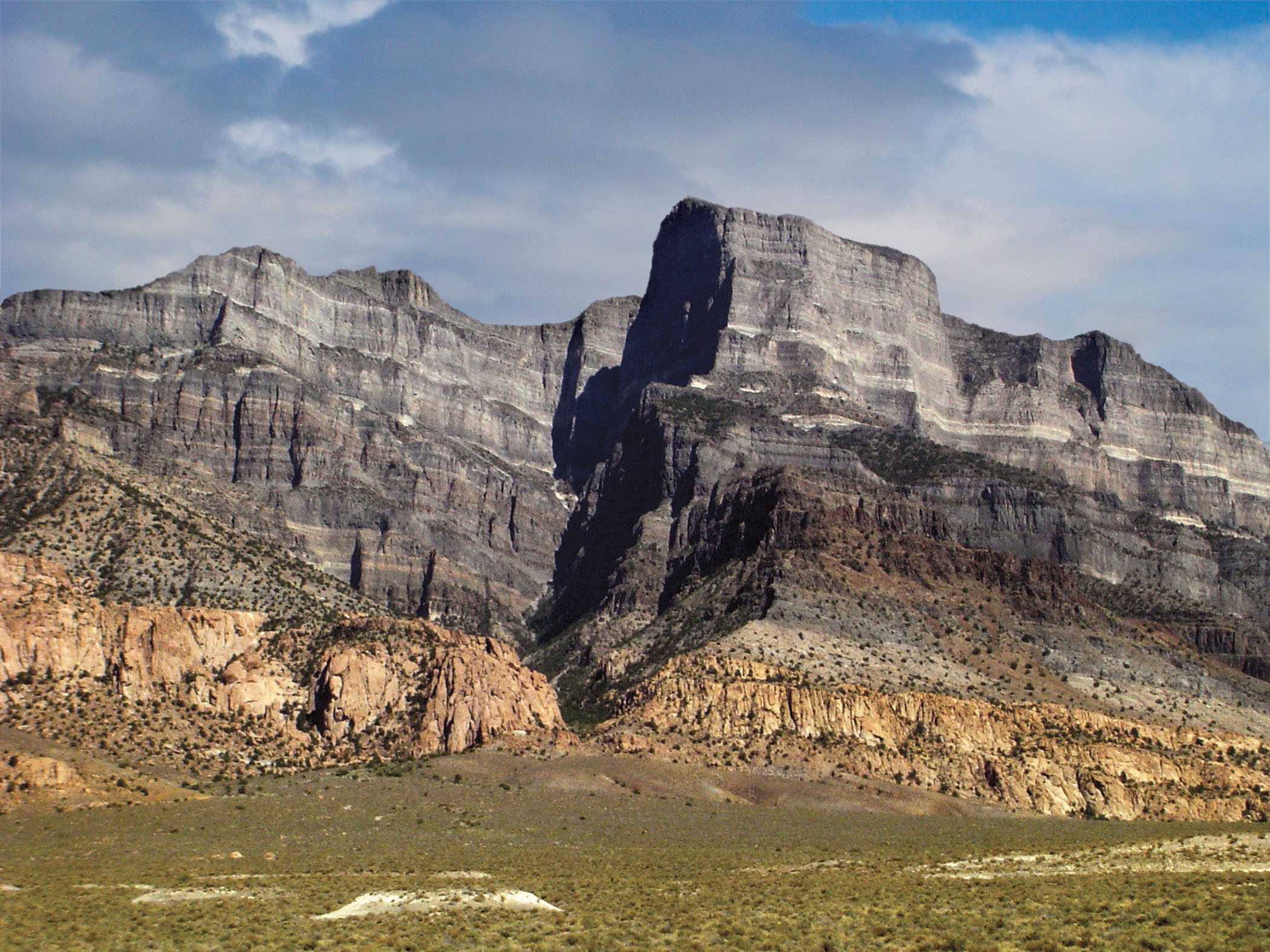 Cambrian- to Ordovician-aged carbonate rocks (limestone and dolomite) make up Notch Peak, where a 2,200-foot cliff (possibly the tallest carbonate cliff in North America) leads to a deep canyon on the west side of the peak. Pink, Jurassic-aged granite is exposed at the foot of the mountain, and scattered deposits of white, clayey marl deposited in Lake Bonneville during the late Pleistocene are present on the valley floor. Notch Peak National Natural Landmark, House Range, Millard County, Utah Photographer: Matt Affolter

The enormity and vastness of the cliff forming the north face of Notch Peak is difficult to describe. Standing near the cliff’s base and looking up is awe inspiring. The view while standing at the top and looking over the edge? I would not know as I was on my hands and knees, too fearful to stand and look over the edge at one of the greatest vertical drops in the contiguous U.S.

Reported estimates of the cliff’s actual height vary significantly from under 2,000 feet to over 4,500 feet, which is likely due to differences in defining where the base of the cliff starts. Photogrammetry (measurements from digital stereoscopic photographs), verified with a paper 7.5′ topographic map, suggests the cliff has an uninterrupted near-vertical drop of over 1,500 feet. The addition of cliff below a small bench 50 to 100 yards wide increases the distance to approximately 2,250 feet. Adding a portion of the very steep base of the sheer drop increases the distance to nearly 2,900 feet.

How does Notch Peak rank among other tall cliffs? The heights of other huge cliffs are also problematic to define and measure. There is no objective definition for a cliff. At what angle does a cliff become a steep slope? When does a single ledge or bench turn one cliff into two? When do multiple small ledges turn a cliff into a slope? Where does a cliff begin or end? Must a cliff be measured down a straight and vertical fall line or can a transect be taken for a lower base elevation? Finding reliable and consistent measurements for cliffs of the world or even North America would be a dissertation for a doctoral degree in trivial drivel. However, Notch Peak’s cliff seems to rank among or near the top ten in the contiguous U.S. Cliffs (or slopes steep enough to perhaps be called a cliff, you be the judge) near the top of this lower 48 states list are found at:Yosemite National Park, California. Examples:

Though Notch Peak is a natural wonder rivaling those commonly seen in state and national parks, its remote location in a state filled with competing natural wonders results in it not being well known, nor often visited.

Geologic Information:
Notch Peak is composed of 500-million-year old limestones and dolomites of the Notch Peak, Orr, and Weeks Formations. A 17-million-year old granite intrusion (sill) crops out at the base of this limestone sequence. Following the pattern found across the Basin and Range Province from western Utah to eastern California, a north-south oriented high-angle fault uplifted the mountain front on the west side of Notch Peak. This uplift allowed erosion to carve the peak’s great cliff.

At least two factors contributed to make Notch Peak’s north-face cliff grander than any other in the Basin and Range Province. First, the cliff is composed of a nearly uninterrupted sequence of strong, weather-resistant, massive limestone and dolomite beds that generally lack shale or other weak layers. Where significant shale beds do exist, they create a small bench near the top of the Orr Formation approximately 1,500 feet below the peak’s summit.

Secondly, the massive limestone and dolomite bedding is nearly flat and horizontal (not folded). Tectonic folding could have resulted in fractures that weaken rock layers. Similarly, tectonic compressional forces have not thrusted these rock layers over one another. Elsewhere in the Basin and Range past episodes of tectonic folding and thrusting have fractured and weakened otherwise similar formations and thereby reduced their integrity and ability to form towering cliffs. Though there is no clear evidence for such, an east-west oriented fracture (perpendicular to the range-front fault) could have provided a zone of weakness contributing to the north-facing orientation of the peak’s greatest cliff.

How to Get There:
Notch Peak is part of Sawtooth Mountain, which comprises the southern part of the House Range. It is immediately north of U.S. Route 6/50, between Delta, Utah, and Baker, Nevada. Be advised, there are no gas stations, nor any other services in the vicinity of Notch Peak. It is in the proverbial middle of nowhere.