Energy News: Does Your Shale Have Gas? Utah Shales Do! 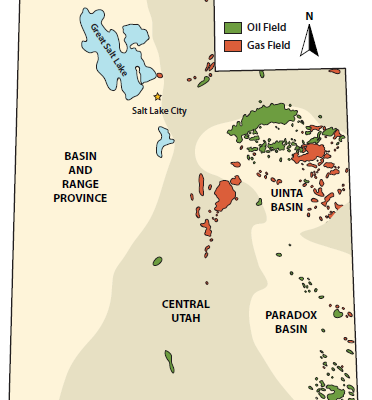 Oil (green) and gas (red) fields of Utah. Most of the current drilling is occurring in the Paradox and Uinta Basins. Several shale gas wildcat tests are scheduled to be drilled in central Utah in the near future. Some areas within the Basin and Range Province may have shale gas potential.

In the quest to meet the ever-increasing demand for energy, companies are exploring for rocks such as shale that not many years ago were considered incapable of producing economic quantities of natural gas. A well-known success story is the Barnett Shale in Texas, which contains trillions of cubic feet of gas and has become an economic success as a result of higher gas prices as well as improved drilling and completion techniques. Recently, exploration for “shale gas” has become a major focus in Utah. Numerous wells have been completed in the Cretaceous Mancos Shale in the Uinta Basin, two wells have recently been completed in the Pennsylvanian Paradox Formation shales in the Paradox Basin, and a well has been drilled and others are planned to test for gas in shales within the Mississippian Doughnut Formation in central Utah.

Shale is considered an unconventional reservoir by the oil and gas industry. Most natural gas is produced from conventional reservoirs consisting of porous (open space within a rock) and permeable (the capacity to transmit gas or liquid) sandstone or limestone where geologic structure or depositional changes in the rock have trapped the hydrocarbons. Shale, a finegrained sedimentary rock consisting mostly of clay and having very low permeability, starts as mud deposited on the floor of a sea or lake, and contains organic remains of the plants and animals that lived in the water. If the mud is eventually buried deep enough, elevated pressures and temperatures turn it into shale and the organic matter is converted into hydrocarbons. The pressures that develop with deep burial cause some of the hydrocarbons to be pushed out of the shale into porous sandstone or limestone beds, but much of it remains trapped within the shale. Although shale beds are commonly the source of hydrocarbons, they are generally considered poor reservoir rock and have rarely been targets of exploration for natural gas because the very low permeability makes production difficult. New well treatments, however, can induce a significant number of fractures, which serve as pathways for the gas to migrate from the shale to the wellbore. Many shale gas wells produce low volumes of gas on a daily basis but will produce for many years. Higher gas prices make these low-volume gas wells economical.

Since a shale bed can be present throughout a large area, and does not require a structural or depositional trap to form a gas reservoir, it could potentially become a major resource play—a large area with low geologic risk but a significant amount of recoverable natural gas. To be a good gas target a shale bed needs to (1) be widespread, (2) contain sufficient organic material, (3) have been buried deep enough to generate dry gas (dry gas means the well does not produce water or oil with the gas), and (4) be thick enough (typically 100 feet or more) or have sufficient natural fractures to contain significant recoverable reserves.