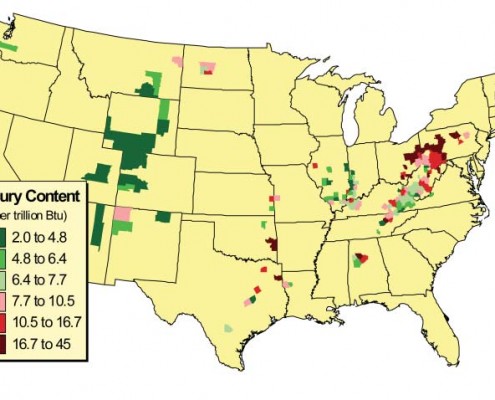 Average mercury content of coal shipped to power plants during 1999, by U.S. county-of-origin. 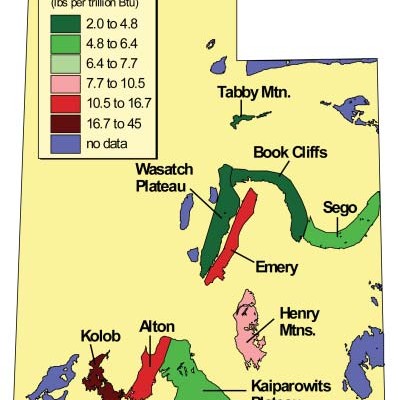 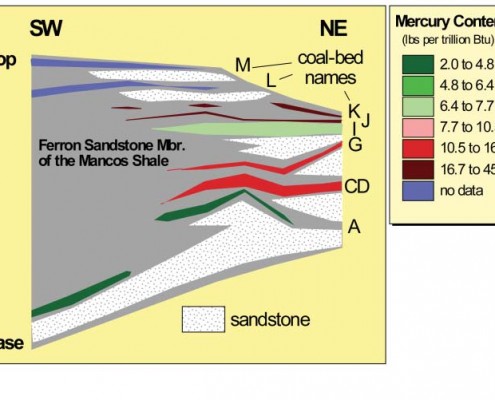 The U.S. Environmental Protection Agency (EPA) is expected to issue new rules limiting mercury emissions from coal-fired electric power plants by March 15, 2005, with enforcement beginning as early as April 2008. Those of us who remember playing with mercury in grade-school science class or from an accidentally broken thermometer may wonder why the EPA is concerned about mercury emissions. After all, mercury is a naturally occurring element that is added to eye drops, childhood vaccines, and dental fillings. Moreover, mercury emissions from power plants do not make the air hazardous to breath, or the water unsafe to drink.

In a word, the problem with mercury is fish – and not just any fish, but large freshwater fish coveted by recreational fishermen, as well as a few ocean fish sold at the grocery store (swordfish, shark, king mackerel, and tilefish). Government guidelines say that children, and women of childbearing age, should not eat these fish because they contain potentially hazardous amounts of methylmercury, which is a highly toxic, mercury-containing organic compound. Regularly eating fish that contains high amounts of methylmercury can cause neurological damage in developing fetuses and children, which results in diminished cognitive, motor, and verbal abilities.

In its December 2000 finding that regulation of mercury emissions from coalfired power plants is appropriate and necessary, the EPA determined that there is a plausible link between mercury emissions from coal-fired power plants and methylmercury concentrations in fish. This determination was largely based on the observation that coal-fired power plants are the largest human source of mercury emissions in the U.S. Indeed, as much as 20 percent of the mercury deposited in the U.S. originates from coal-fired power plants. Other major sources include municipal and medical waste incinerators (17 percent), chlorine plants (3 percent), and hazardous waste incinerators (2 percent); these sources have already been regulated. Finally, at least 40 percent of mercury deposition in the U.S. is from sources that are not easily controlled (international sources, natural emissions, and re-emission of accumulated human emissions). Atmospheric mercury becomes a problem when it is deposited by rainfall and enters streams and lakes where some of it is converted by microbes into methylmercury. The methylmercury is concentrated through the food chain and can reach high levels in large predator fish.

Fortunately, fish from Utah rivers, lakes, and reservoirs do not contain harmful levels of mercury. Likewise, nearly all commercial fish, such as salmon, catfish, canned light tuna, and the generic breaded fish stick, are also considered safe (and nutritious) for young women and children to eat. However, the low mercury content of fish in Utah is little comfort to recreational and subsistence fishermen in the upper Midwest and New England where mercury advisories have been posted for nearly all inland and coastal water bodies.

Mercury emissions from coal-fired power plants originate from trace amounts of mercury in coal. Although the average mercury content of U.S. coal is similar to the average crustal abundance of mercury (~0.08 parts per million), the enormous amount of coal burned in the U.S. results in potentially large mercury emissions. For example, 950 million tons of coal containing 75 tons of mercury was burned at nearly 500 U.S. power plants during 1999. About 30 tons of this mercury was effectively trapped in coal-ash waste or desulfurization residues. The remaining 45 tons of mercury was emitted to the atmosphere with the stack gas.

This different behavior of eastern and western U.S. coal has been attributed to the higher chlorine content of eastern coal, which promotes the formation of ionic, water-soluble forms of mercury in the stack gas that is readily trapped by conventional (wet) stack-gas scrubbers. Other elements that may influence the effectiveness of mercury-control technologies include the iron, sulfur, sodium, and calcium in coal; eastern and western U.S. coals contain substantially different amounts of these elements.

In recognition of the lack of universally effective technologies to control mercury emissions from power plants, the EPA has proposed less stringent mercury emission limits for plants that burn western subbituminous or lignite coal. However, as currently proposed, the rules require power plants that burn Utah bituminous coal to meet the same emission limits as plants burning eastern bituminous coal. Meeting these limits may prove challenging for both Utah coal producers and consumers.

For more information see the following references, or contact the author (jeffreyquick@utah.gov) who is investigating how geographic variation of coal chemistry can be used to optimize mercury control technologies, in a project funded by the U.S. Department of Energy (contract No. DE-FC26-03NT41901; Web Site geology.utah.gov/emp/mercury/index.htm.)