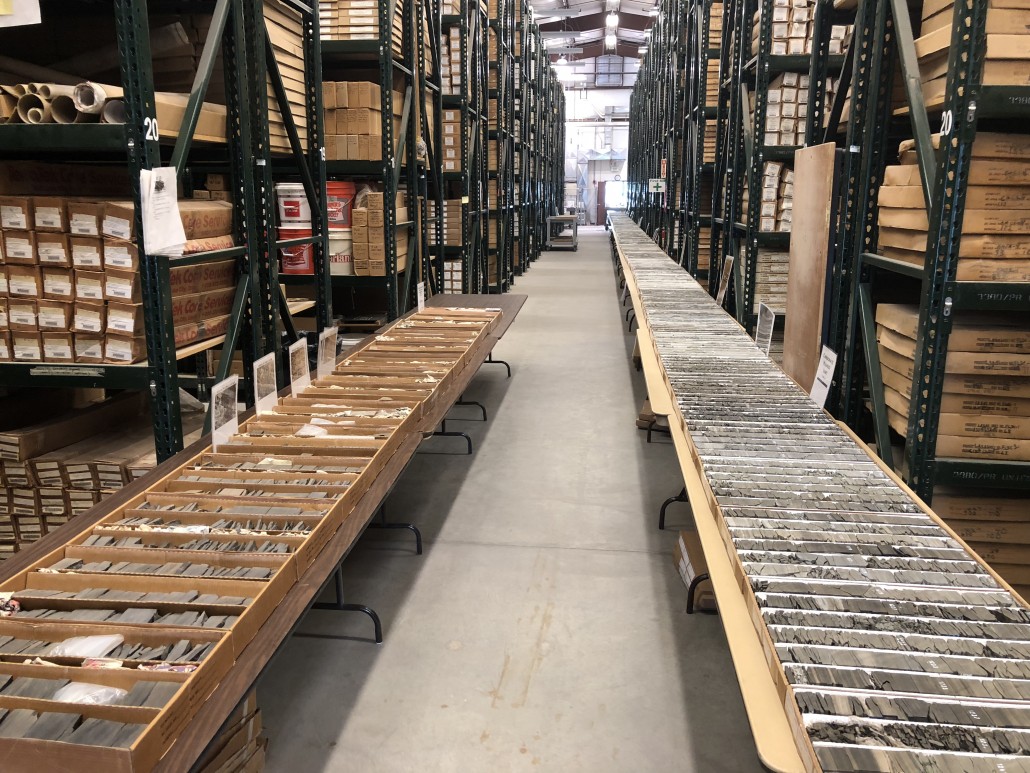 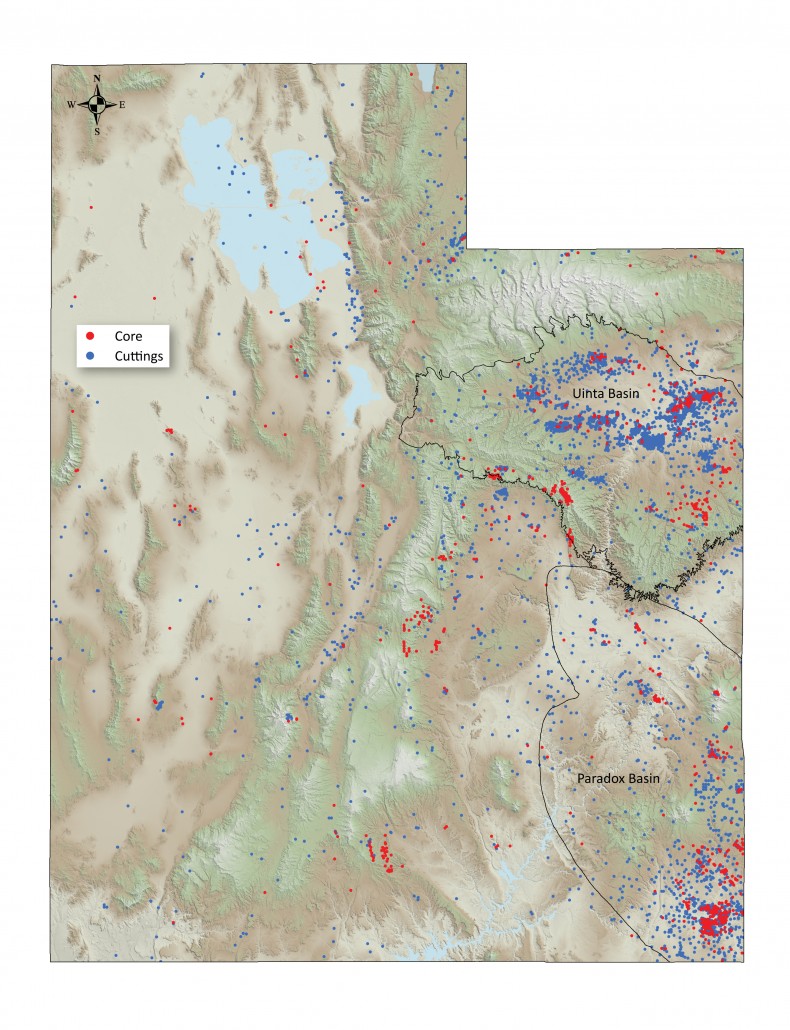 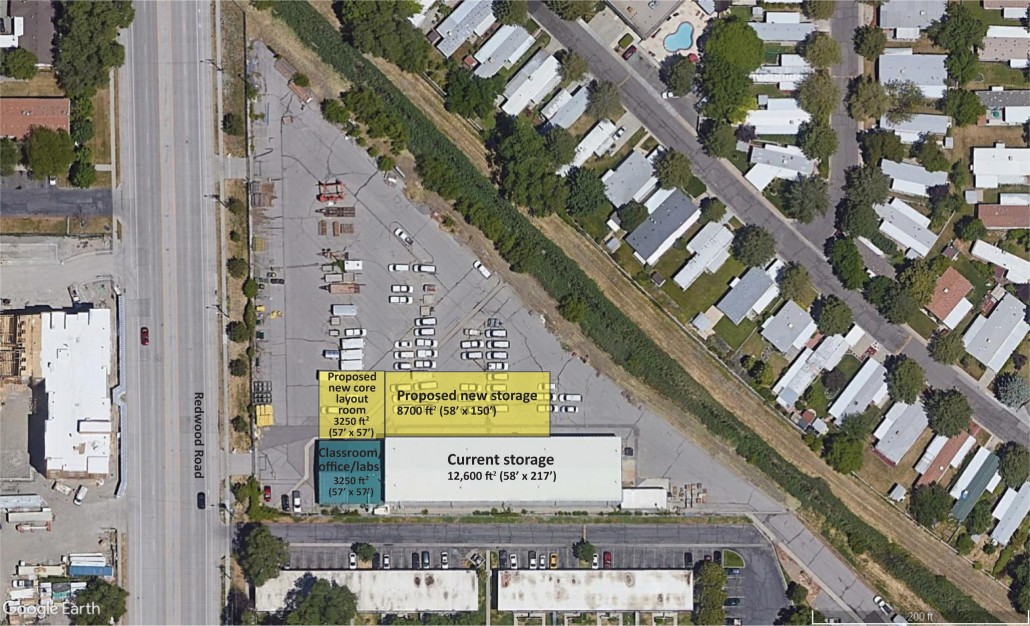 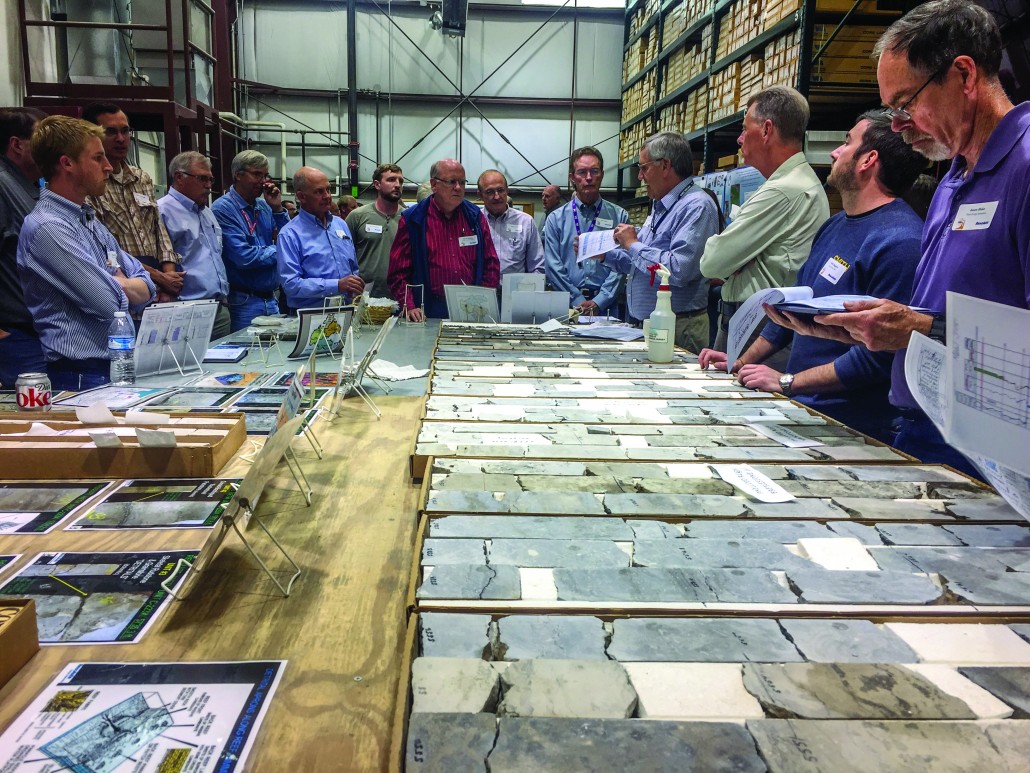 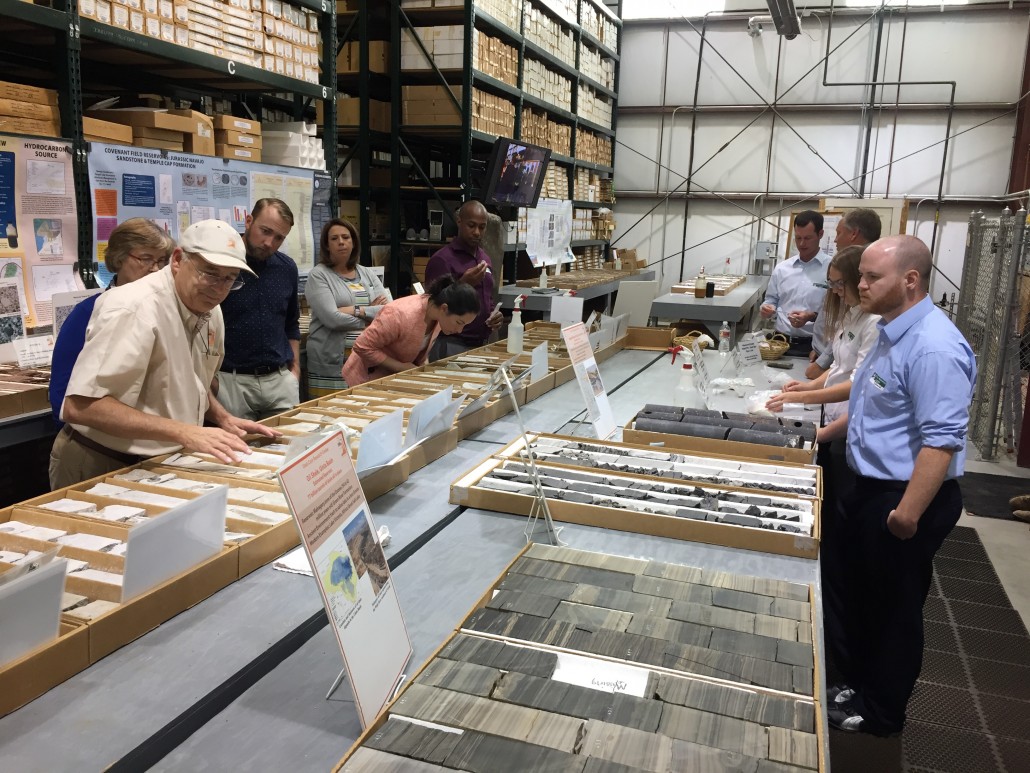 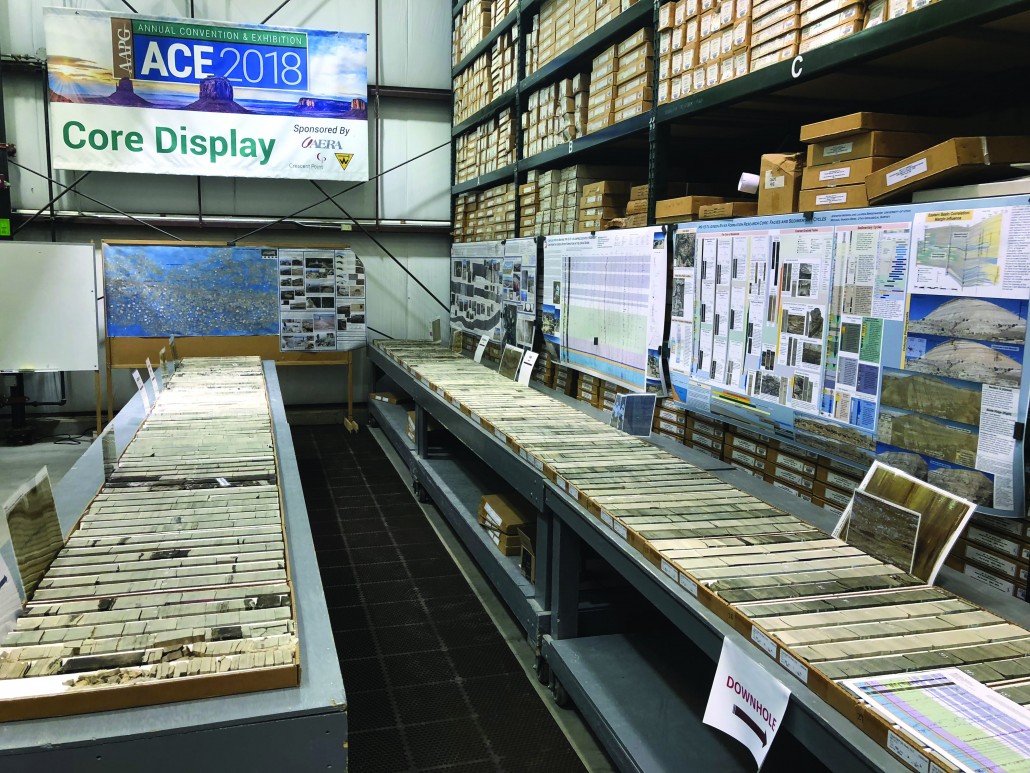 Established in 1951, the Utah Geological Survey’s Utah Core Research Center (UCRC) contains the region’s only publicly available and most complete collection of geologic core and cuttings from Utah. Think of it as a geologic library, storing inimitable archives of geologic knowledge for future generations. The current 15,000-square-foot facility was built in 1997 and presently holds core from over 1500 drill holes totaling about 400,000 feet of material (over 75 miles, roughly the distance from Salt Lake City to Logan!), and cuttings from nearly 5000 drill holes representing over 57 million feet of subsurface data (nearly 11,000 miles, almost half way around the Earth!). Most of this material came from oil and gas wells, but some came from metal and potash exploration wells, water/geothermal wells, coal exploration wells, and many others. This collection represents about $5 billion worth of investment in Utah’s natural resources and in many cases is irreplaceable.

The UCRC collection is an invaluable resource for companies looking to develop mineral and energy resources in Utah, most of which are in rural areas of the state. In 2018 alone, the UCRC hosted over 400 visitors from all over the world. Industry professionals often visit the UCRC to examine core and collect sample material for analytical testing. These examinations help them better understand their lease area, reduce exploration costs, and hopefully spur increased development. It is not uncommon for the UCRC to be the first place that a new-to-Utah petroleum company will visit before investing in Utah leases or drilling new wells. The collection is also widely used by the academic community. Professors and students from all over the world come to Utah to examine our core and cuttings for various research projects, the results of which are often published, leading to increased interest and understanding of Utah’s geology.

Furthermore, the UCRC hosts educational workshops (20+ per year) on a wide variety of geologic topics. Outside groups will use our facility and core material to run workshops, or geologists from the UGS will organize custom educational courses for oil companies and university geology students. In the past few years, the UGS has organized workshops for geologists from several international companies including BP, ExxonMobil, Shell, ConocoPhillips, Anadarko, Total (France), Petrobras (Brazil), Equinor (Norway), and Repsol (Spain), as well as more local companies including QEP Resources, Wexpro, Newfield, Finley, Ultra, Berry, Crescent Point, Bayless, Bill Barrett, Axia, Resolute, Rose Petroleum, Fidelity, and many others.

Since the downturn in oil and gas prices in late 2014, several companies have donated large quantities of core/cuttings material to the UCRC as a cost-saving measure. The most significant donation was from Resolute Energy, the former operator of Greater Aneth, Utah’s largest producing oil field located in San Juan County (see Survey Notes, v. 49, no. 2, p. 6–7). This donation consisted of core from over 120 wells, stacked on about 140 pallets requiring six semi-truck loads to deliver the material from Texas. In addition, we have recently received new cores from the Green River Formation in the Uinta Basin, the Moenkopi Formation near the San Rafael Swell, and cores from the Navajo, Entrada, and Dakota Sandstones.

With all the recent donations, the UCRC warehouse is at capacity. The UGS has proposed building an additional 9000 square feet of storage space to accommodate additional donations of core and cuttings. Without access to a secure/modern core center, operators looking to offload their core might opt to dispose of it instead of donating this valuable material. It is of vital importance that the State of Utah offers an option to collect and store this important material and make it available for companies, researchers, and students to use and examine.

In addition, the UCRC is in dire need of an updated and expanded core viewing area. The UCRC currently uses space in the warehouse portion of the facility. This space is not ideal for core examination or for teaching workshops because the area is too small, limiting the amount of core that can be displayed at one time and making examination difficult and inefficient; the area is not climate controlled, becoming too cold in winter and too hot in summer; and the area is within the active warehouse, making safety of guests a concern. With an improved core viewing area, we can provide a more user-friendly environment for core examination, increasing productivity and efficiency. We will also be able to host larger and more professional educational workshops, attracting more visitors to the state.

As the UGS tries to raise the funds necessary to expand and improve the UCRC, we want to emphasize that the facility is not just a warehouse full of rocks, but holds billions of dollars worth of investment in Utah’s natural resources. UGS geologists are dedicated to curating this important collection and fostering its beneficial use for Utah industry and geologic knowledge. If you are interested in seeing thi collection, using it for research, or teaching a core-based geologic workshop, please feel free to contact us at any time. Visit https://geology.utah.gov/?p=5230 for more information.

Metal Exploration
In 1972, AMAX Exploration drilled four deep core holes near the historical Cactus coppergold- molybdenum mine in the San Francisco district, Beaver County, Utah. Although these holes intersected alteration and some mineralization, they were not sufficiently encouraging at the time for AMAX to retain their property position and do further work. Rather than continue storing the core, they chose to donate it to the UGS.

In 2016, Alderan Resources acquired a large property in the San Francisco district, including the old Cactus mine. In the course of their due diligence, they discovered that the UGS had the AMAX core. Company geologists visited the UCRC to examine these cores and took samples for new assays. They recognized that the drill core was compatible with their geologic model of the Cactus mine being part of a much larger porphyry copper system, similar to the Bingham Canyon mine. As a result of the promising analyses performed on the core housed at the UCRC, in 2017 Alderan raised about $20 million in an initial public offering, set up an office in Salt Lake City, hired some local senior staff, leased a field office in Milford, hired local support staff, and began an aggressive core drilling program. Their  initial holes in 2017-18, totaling over 14,000 feet, targeted the Cactus mine area and intersected some interesting shallow mineralization. Alderan then raised another $3 million to test additional targets in the district.

Oil and Gas Exploration and Production
When new oil and gas leases are offered or if a company is looking to acquire acreage, potential buyers need to understand the geology and resources available on these lands. Often, prospective buyers send their geologists to the UCRC to examine core and cuttings material from the lands in question to gain a better understanding of the potential investment. For example, in spring 2018, QEP Resources decided to sell their long-held acreage in the Uinta Basin. Soon after the announcement, Middle Fork Energy visited the UCRC to examine our extensive collection of cores from this area. Subsequently, in July 2018, Middle Fork announced that it had purchased QEP’s acreage for $155 million. Several times a year, companies with no current assets in Utah will visit the UCRC to examine core material; most of these companies are doing initial data gathering to determine if they want to invest in Utah resources. UGS geologists are always on hand and available to help educate company representatives on Utah’s natural resource potential.