By James I. Kirkland
State Paleontologist 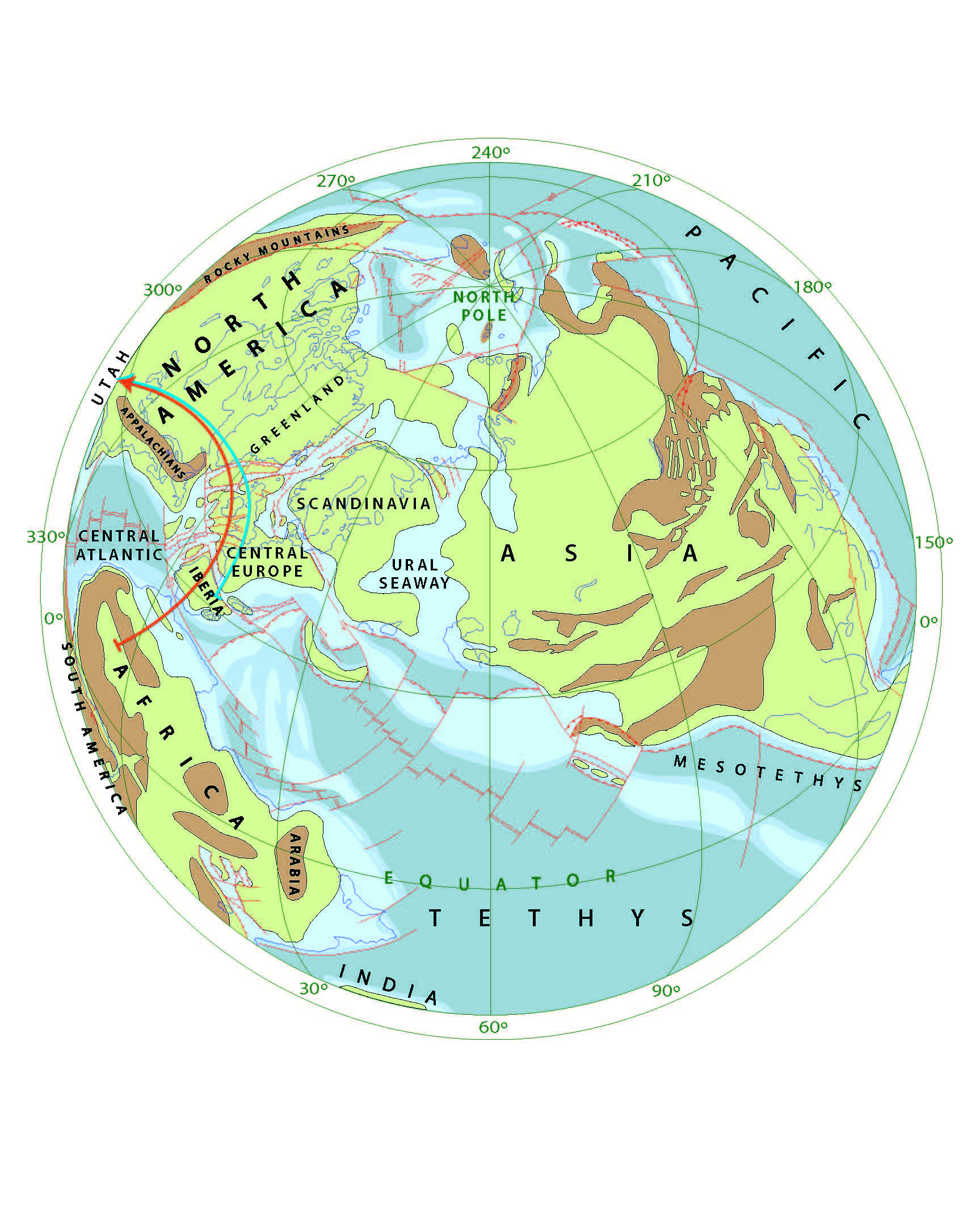 Oblique polar projection of continental positions in the northern hemisphere 130 million year ago during the Early Cretaceous deposition of the upper portion of the Yellow Cat member of the Cedar Mountain Formation. Simplified after “The Paleogeographic Atlas of Northern Eurasia” https://www.researchgate.net/pulication/263889335_The_Paleogeographic_Atlas_of_Northern_Eurasia. 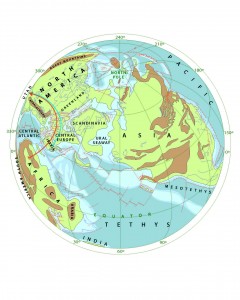 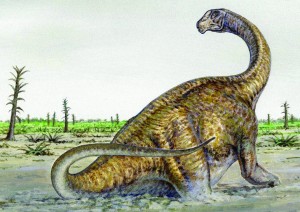 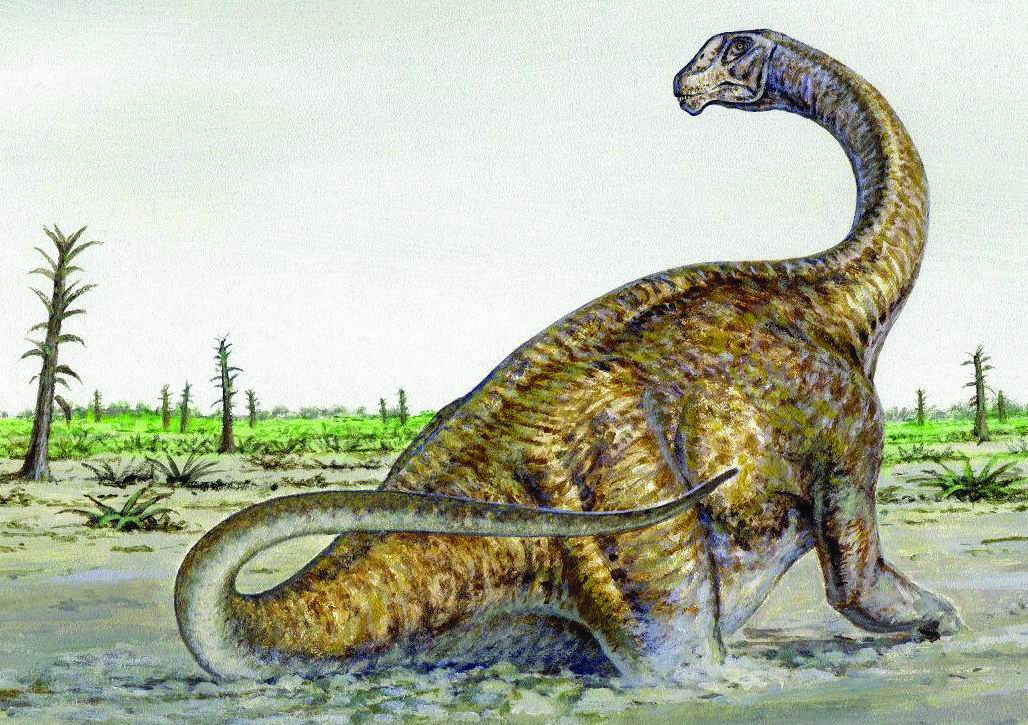 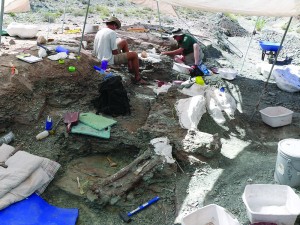 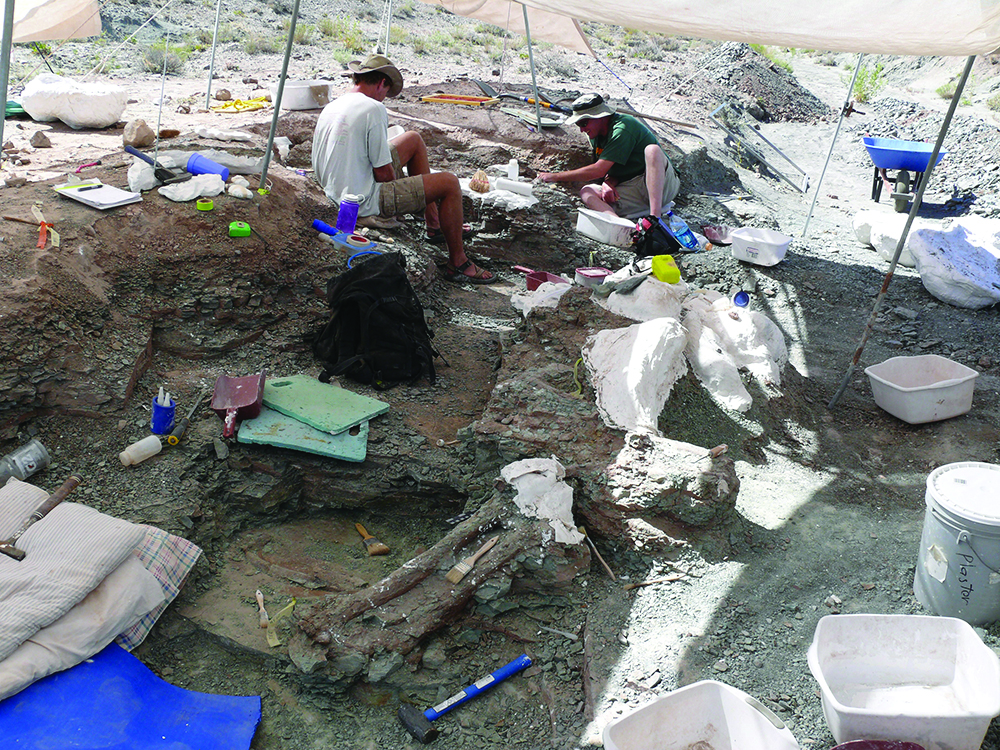 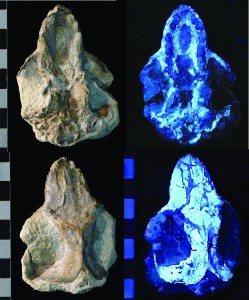 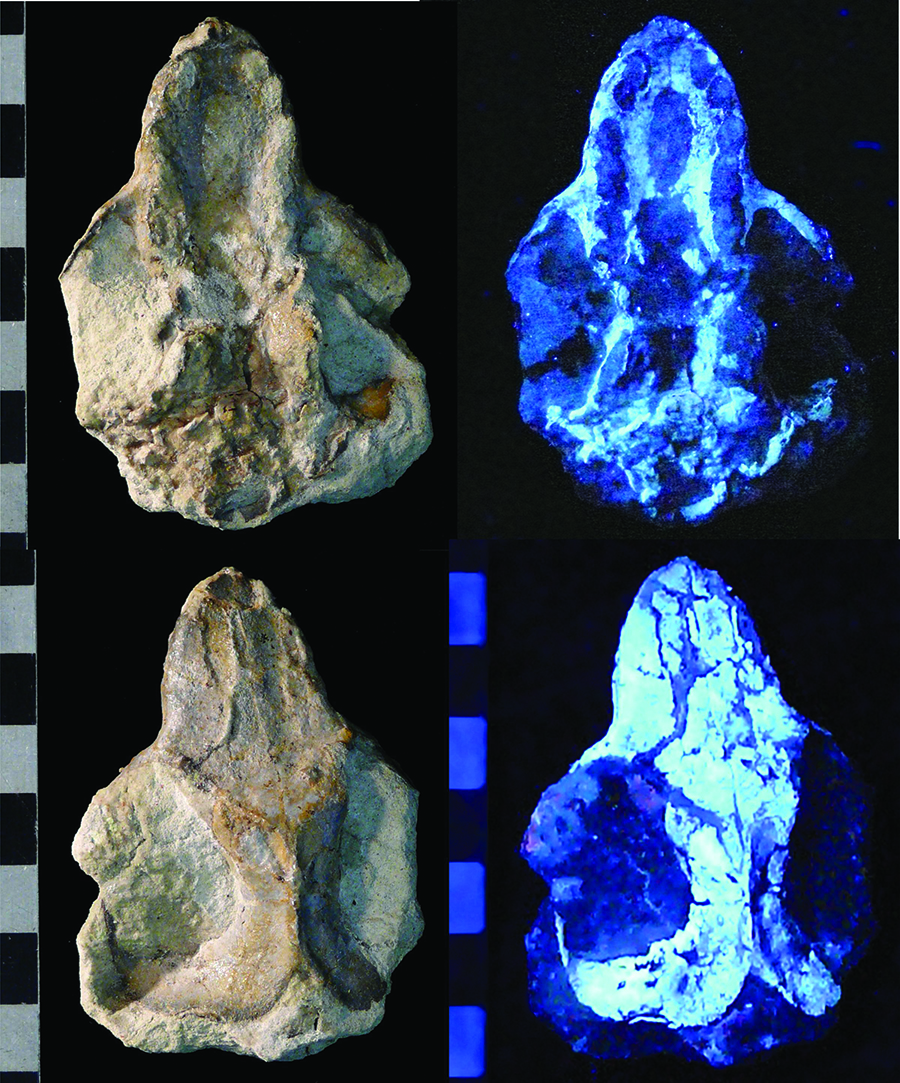 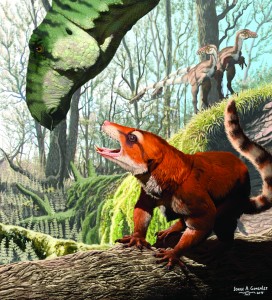 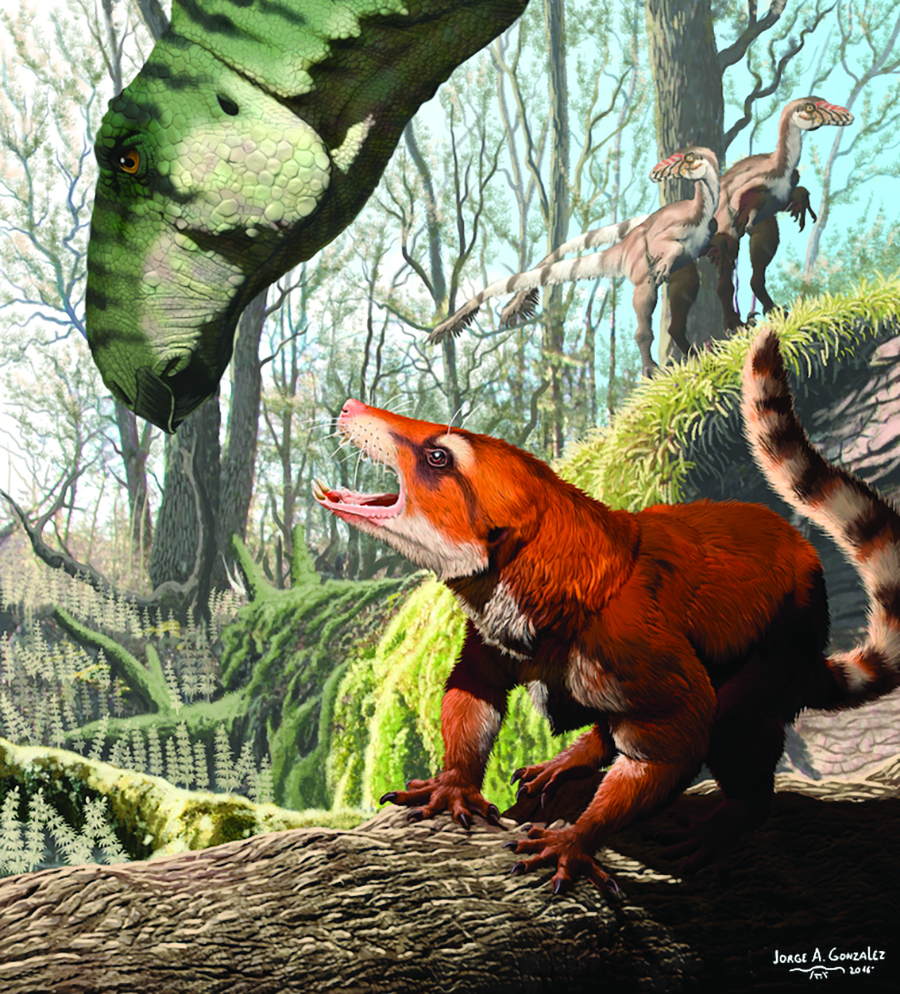 The Cedar Mountain Formation of east-central Utah preserves the most complete North American record of life on land during the Early Cretaceous (see Survey Notes v. 37, no. 1, p. 1–5) and has convincing evidence that the basal Yellow Cat Member in Grand County preserves the two oldest dinosaur faunas in North America (see Survey Notes v. 49, no. 1, p. 4–5). As far back as the 1990s, I and others noted that the presence of polacanthid ankylosaurs in both Utah and Europe suggested a paleobiogeographic connection across the Atlantic Basin during Yellow Cat deposition. However, the identification of polacanthid ankylosaurs in the Late Jurassic Morrison Formation (see Survey Notes v. 43, no. 4, p. 4–5) indicates that rather than migrating across a land connection that hypothetically remained into the Early Cretaceous, the Early Cretaceous species on both continents may merely be separate descendants of related Jurassic species that migrated between Europe and North America when a land connection is more widely accepted.

Last year, working with our European colleagues led by Spanish researcher Rafael Royo-Torrez of Dinopolis Foundation, we described North America’s first turiasaur sauropod from the most complete individual sauropod skeleton ever found in North America’s part of the lower fauna of Yellow Cat. The Turiasauria are only known from Upper Jurassic species in southern Europe and are more primitive than any of the many sauropod species preserved in the Morrison Formation. Thus, North America’s most basal (primitive) sauropod Mierasaurus bobyoungi is from the Early Cretaceous of Utah. Our scientific hypothesisis that following a mass extinction at the end of the Jurassic wiping out the abundant diplodocid and camarasaurid sauropods of the Morrison Formation, a turiasaur succeeded in crossing the proto-Atlantic Ocean to re-colonize western North America in the Early Cretaceous. Additionally, we determined that the recently described Moabosaurus utahensis from the upper fauna of Yellow Cat Member was also a species of Turiasauria.

The presence of an Early Cretaceous connection with Europe has been substantiated and even further supported with the discovery of North America’s first haramiyid mammalimorph from another UGS locality, only a few miles away from the Mierasaurus site, in the upper Yellow Cat Member which also preserved the thumb-spiked bipedal plant eating iguanodont dinosaur Hippodraco (see Survey Notes v. 45, no. 1, p. 1–3). The Haramiyida are just outside the crown group of “true” mammals that include modern egg-laying monotremes, marsupials, and placental mammals, meaning all living mammals share a common recent ancestor that slightly post-dates the Haramiyida. Haramiyida were only known from fragmentary fossils from the Upper Triassic of Europe and Greenland and have recently been described from a series of diverse, fur-covered species that are preserved as flattened skeletons in lake beds from the upper Middle Jurassic of northeastern China described by our colleague Zhe-Xi Luo of the University of Chicago. Utah has a diverse (~100 species) record of Late Cretaceous mammals known from isolated teeth and jaw fragments. This recent discovery is Utah’s first Early Cretaceous mammal and the first skull of a Cretaceous mammal. Additionally, it is both the youngest known haramyid and the first ever found in North America. The new haramiyid is named Cifelliodon wahkarmoosuch for Richard Cifelli of the University of Oklahoma, a pioneer in researching Mesozoic mammals, and the species name is a reflection of the Ute Indian  words for “Yellow Cat.” Zhe-Xi and I asked University of Utah post-doctoral student Adam Huttenlocker, now at the University of Southern California, to take the lead on the project. Adam extracted an extraordinary amount of information from this three dimensional skull by creating digital models of the molars and the brain permitting some critical connections. First, he recognized that the teeth were nearly identical to some problematic, isolated teeth from the Early Cretaceous of North Africa named Hahnodon, placed in its own family the Hahnodontidae. Thus, he found that the hahnodontids were Haramiyids and that Cifelliodon should be assigned to the haramyid family Hahnodontidae. Furthermore, he was able to show a possible connection with the oddball, problematic Late Cretaceous Southern Hemisphere mammalian group the gondwanatheres based on procumbent incisors and several other cranial characters.

Once again, Utah fossils demonstrate not only international significance, but global paleobiogeographic significance. Both the largest and the
smallest of our Yellow Cat terrestrial vertebrates indicate that the opening of the North Atlantic, which acted as an oceanic barrier to faunal exchange, occurred as much as 30 million years later than previously thought, and faunal exchange between the Northern and Southern Hemisphere was possible across the supercontinent of Pangaea as much as 15 million years into the Early Cretaceous.