The prestigious 2017 Crawford Award was presented to State Paleontologist James Kirkland in recognition of his work in “The Lower Cretaceous in East-Central Utah—The Cedar Mountain Formation and its Bounding Strata”, from Geology of the Intermountain West, Volume 3, Utah Geological Association.

Most think of Utah as the “real Jurassic Park” because of the important dinosaur collections excavated from the Late Jurassic Morrison Formation. However, the number of new and existing dinosaurs that Jim has discovered, excavated, and described from the Cedar Mountain Formation rivals the Morrison. His contributions demonstrate that the Early Cretaceous Cedar Mountain Formation is as productive and important to understanding dinosaur diversity and evolution. He has put Utah on the map for Early Cretaceous dinosaur research. Because of his work, Jim is recognized throughout the world as the expert on the Cedar Mountain Formation, its stratigraphy, and dinosaur fauna. This publication is the culmination of a career of studying this formation and the vertebrate fossils it contains; it is the quintessential reference on the Cedar Mountain. It solidifies the regional understanding of the Cedar Mountain lithostratigraphy, biostratigraphy, and environments of deposition. It also formalizes the member names, which he and a co-worker first applied a decade ago. It is well written and well organized with many annotated photographs and detailed illustrations.

The Crawford Award recognizes outstanding achievement, accomplishments, or contributions by a current UGS scientist to the understanding of some aspect of Utah geology or Earth science. The award is named in honor of Arthur L. Crawford, first director of the UGS. 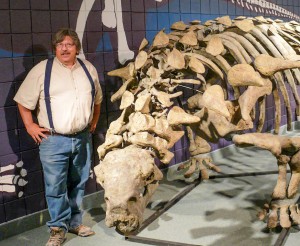