What are fulgurites and where can they be found? 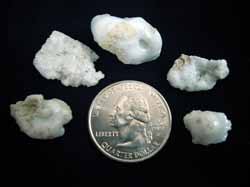 Sand fulgurites found on the top of Mount Raymond. U.S. quarter for scale. 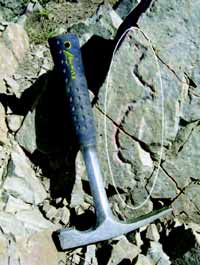 Most people have never seen a fulgurite, and many that have probably did not realize what it was at the time. Fulgurites are natural tubes or crusts of glass formed by the fusion of silica (quartz) sand or rock from a lightning strike. Their shape mimics the path of the lightning bolt as it disperses into the ground.

Two types of fulgurites have been recognized: sand and rock fulgurites. Sand fulgurites are the most common and are generally found in beach or desert regions containing clean (free of fine-grained silt or clay), dry sand. They resemble roots or branching tube-like structures that have a rough surface, covered with partially melted sand grains.

Coatings or crusts of glass formed on rocks from a lightning strike are called rock fulgurites. These fulgurites are found as veins or branching channels on a rock surface or lining preexisting fractures within the host rock. Rock fulgurites are primarily found on the top or within several feet of mountain summits.

Mountain peaks are natural lightning rods that are repeatedly blasted by lightning strikes during severe weather. Rock fulgurites can be found throughout many of the mountain ranges of the world, including the French Alps (Mont Blanc), Pyrenees Range, and western U.S. mountains such as the Sierra Nevada, volcanic peaks of the Cascade Range, Rocky Mountains, and Utah’s Wasatch Range.

While hiking in the summer of 2003, I discovered both sand and rock fulgurites on some of the higher summits of the Wasatch Range. I observed very small sand fulgurites (an inch or less) in some of the surface float on top of Mount Raymond (10,241 feet) and Broads Fork West Twin (11,328 feet).

In the Wasatch Range, rock fulgurites appear to be confined to mountaintops composed chiefly of quartzite, but summits consisting of other rock types could have them as well.

So, the next time you go hiking or exploring be on the lookout for fulgurites! It is very possible new fulgurite discoveries await the adventurer on many of the higher summits and desert areas of Utah.