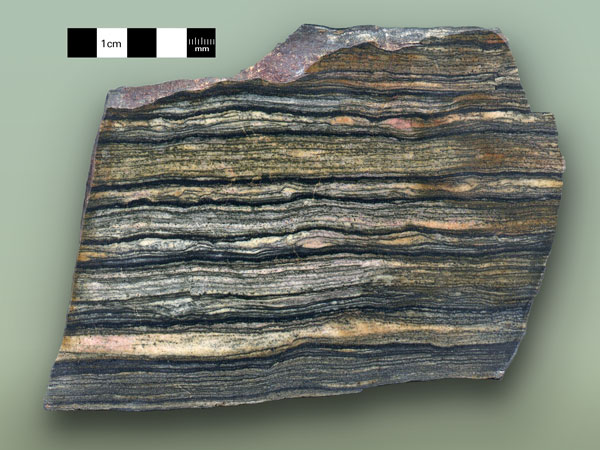 Multiple light (sand) and dark (silt and clay) bands in this piece of shale from the Big Cottonwood Formation indicate the varying energy of rising and falling tides. Photo courtesy of Marjorie A. Chan, Dept. of Geology & Geophysics, University of Utah.

This tour begins 1 billion years ago when the area was a tidal environment at an ocean shoreline. The tidal environment is preserved in the now-tilted layers of quartzite and shale that make up the canyon walls for the first 6 miles. In some areas, the shale is metamorphosed into argillite or slate.

Traveling farther up the canyon, you progress through times when different ancient seas covered the area; the sediments left on the ocean shore and floors are now the 600- to 100-million-year-old sandstone (and quartzite), shale, and limestone.

Fingers of magma intruded up through these rocks about 70 million years ago, and can be seen between miles 7.3 and 8.3 where the red- to dark-colored intrusions contrast with the white limestone and marble. These intrusions are called dikes when they cut perpendicular through the limestone/marble layers or sills when they parallel the bedding.

The head of the canyon reveals 35-million-year-old igneous activity where a large body of magma intruded into the surrounding rock and, while beneath the Earth’s surface, then cooled and hardened into a gray granitic rock called granodiorite. Millions of years later, after the overlying softer sedimentary rocks eroded, the granodiorite was exposed and now makes up the peaks surrounding Brighton.

About 30,000 to 8,000 years ago, Brighton was buried under hundreds of feet of glacial ice. The main glacier flowed down the canyon 5 miles where it abruptly ended at Reynolds Flat (mile 9.0). At this point you can see an obvious difference in topography: a narrow, twisting canyon below Reynolds Flat and an open, straight canyon above. This illustrates a classic example of a river-carved “V-shaped” canyon (below Reynolds Flat) and a glacier-carved “U-shaped” canyon.

One of the best documented and oldest known records worldwide of tidal rhythmites is in Big Cottonwood Canyon. Discovered in the 1990s, this record is enthusiastically being researched, in large part to provide clues to ancient lunar cycles.

Yearly, monthly, and even daily and semi-daily tides are recorded in the black shale of the 850-million to 1-billion-year-old Big Cottonwood Formation.

Within the shale are thin, alternating layers of light-colored sand and dark-colored silt and clay. The sand was carried by peak (strong, dominant) flows and the silt and clay by slack (weaker, subordinate) waters at changing tides. Thus, these thin individual bands record daily tides and can be counted much like we count tree rings.

Because the gravitational pull of the moon and the sun cause tides, the length of an ancient day and lunar month can be determined from these tidal rhythmites. Long ago, the moon took less time to orbit the Earth, the Earth was spinning faster, and thus the days were shorter and there were more of them in a year. These records in stone indicate that one billion years ago, a day on Earth lasted only 18 hours, there were 13-plus months in a year, and about 481 days in a year! 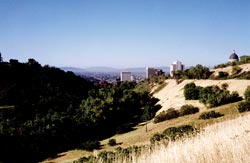 However, with the water comes geologic hazards such as floods, debris flows, and landslides. In 1983 for example, the creek flooded its banks in Memory Grove Park and thousands of volunteers slung sandbags along State Street to channel the racing water.

In the lower part of the canyon are three debris catchment basins designed to prevent debris flows from reaching downtown. Upstream at mile 3.0 on City Creek Canyon Road, a good example of a prehistoric debris-flow deposit can be seen.

Along Bonneville Boulevard you can see at least two active landslides (miles 0.5 and 0.6), outcrops of both fine- and coarse-grained Lake Bonneville sediments (miles 0.4 and 1.0, respectively), and the remains of an ancient debris flow of volcanic (andesitic) rock and mud (mile 0.9).

Upstream of Bonneville Boulevard at mile 1.2 on City Creek Canyon Road, the canyon topography changes from relatively narrow and steep to broad and more rolling. This change reflects a transition of the bedrock from conglomerate that can stand as steep slopes, to weathered volcanic rock (similar to that seen at mile 0.9 on Bonneville Boulevard) that is unstable on steep slopes and has formed a large landslide. This prehistoric landslide appears to have crossed the creek and may have temporarily dammed it. Landslide dams are unstable and can fail catastrophically, releasing a flood of water.

A second major change in the canyon is found at mile 4.5 where the road crosses the presumably inactive Rudy’s Flat fault, transitioning from the near-horizontally bedded, less than 40-million-year-old conglomerate to near-vertical, 300- to 400-million-year-old limestone beds that form large fins. This limestone was originally deposited in horizontal layers in an ancient ocean and later tilted to near vertical during the Sevier mountain-building event.

This Is The Place Heritage Park is situated on the north side of Sunnyside Avenue near the mouth of Emigration Canyon to commemorate pioneer emigration. It is a fitting start to the Emigration and Parleys (named after Mormon pioneer Parley Pratt) Canyons geologic road log. The route climbs up Emigration Canyon Road to Little Mountain Summit, descends to SR-65 and I-80, and ends at the mouth of Parleys Canyon.

The roads pass through sedimentary rocks of Triassic, Jurassic, and Cretaceous ages. Much of the route is in the Jurassic Twin Creek Limestone, which includes oolitic, sandy, silty, fossiliferous, massive, and/or shaley (some intensely shattered) limestone. The formation also consists of small amounts of red siltstone and shale. The red shale at mile 0.9 may be a remnant of an ancient soil or erosion surface.

The next unit encountered in Emigration Canyon is the Jurassic Preuss Sandstone, which consists of chocolate-brown sandstone and fine-grained brown and white conglomerate. In places near Little Mountain Summit, the river-deposited sandstone shows cross-beds and drag-marks made by driftwood or other objects.

The white limestone portion of the Cretaceous Kelvin Formation, which was probably deposited in shallow lakes near a source of sand and fine-grained gravel, locally contains scattered black pebbles.

The Triassic Ankareh Formation can be seen at the mouth of Parleys Canyon where the red and white rock layers are steeply tilted on the southeast flank of the Parleys Canyon syncline. The red rocks on the north side of the canyon mouth contain mud cracks and small ripple marks, which were created by shallow water that gently lapped back and forth across a mud flat that occasionally dried up. The large ripple marks on the white quartz conglomerate indicate energetic currents in stream channels.

Emigration and Parleys Canyons have provided access to the Salt Lake Valley since pioneer times in the mid 1800s. In 1846, the Donner Party carved their way through Emigration Canyon on their way to California.

To clear the canyon’s trees and brush for the wagon passage required so much work that by the time the party reached the narrow, highly thicketed gorge at the canyon mouth they were so frustrated that, in desperation, they pulled the wagons over a ridge to bypass the gorge. The Donner Hill monument (mile 0.7) commemorates this effort.

In 1847, Mormon pioneers followed the Donner Party trail but cleared a way through the thicket instead of going over Donner Hill. Trail markers show the “Pioneer Trail” from Little Dell Reservoir, across Little Mountain Summit and into Emigration Canyon.

Wagons were unable to pass through Parleys Canyon until 1850 when Parley Pratt cleared the last three miles through a deep, winding gorge with a rough bottom. Stagecoaches began to use the canyon in 1858 and the Pony Express in 1860, but the services were dropped by 1869 when the Transcontinental Railroad was completed. 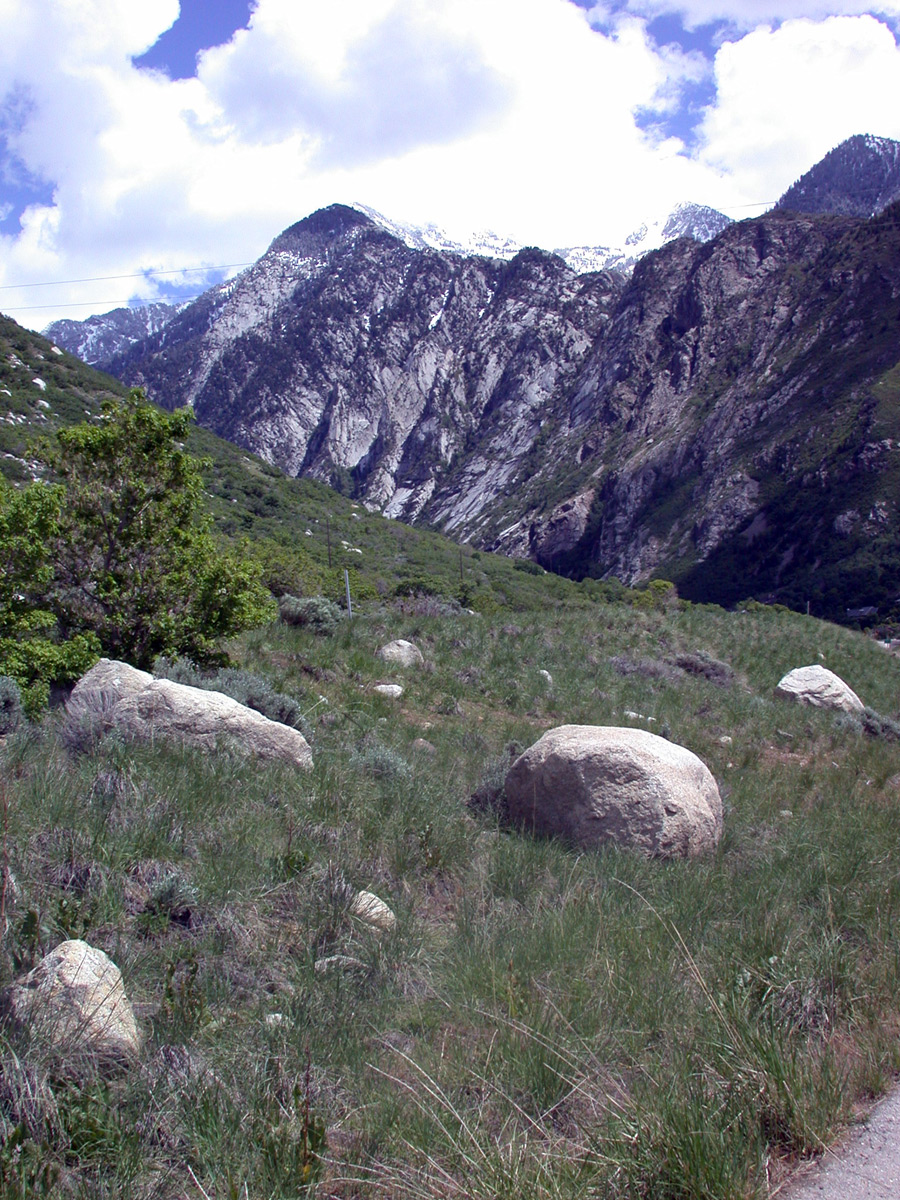 This road tour begins at a Salt Lake County geologic view park, located just north of the intersection of Wasatch Boulevard and Little Cottonwood Road. From here you can view evidence of prospectors seeking riches, glaciers creeping down the canyon, and earthquakes rupturing the ground.

North of the canyon mouth are mine dumps located in the oldest rocks (greater or equal to 1.6 billion years) in the canyon: the schist and gneiss of the Little Willow Formation. Prospectors mined minor gold deposits within this formation.

A massive glacier carved the canyon into its classic U-shape over thousands of years beginning about 30,000 years ago. This 12-mile-long glacier, the longest and largest in the Wasatch Range, stretched from Albion Basin down to Lake Bonneville’s shores.

Repeated large earthquakes in the past tens of thousands of years created the long, steep slope cutting across the canyon mouth. In this area, the Wasatch fault contains some of the largest geologically recent fault scarps in Utah.

The darker rocks at the mouth of the canyon, together with the darker (shale) and lighter brown (quartzite) rock layers along most of the northern ridge line up to Snowbird, were deposited as clay and sand in a marine tidal environment 1 billion to 850 million years ago.

Unconformably abutting these oceanic deposits (near mile 8.6) is a dark-colored rock unit called glacial till that contains a hodgepodge of boulders, cobbles, and pebbles abandoned by continental glaciers around 850 million years ago.

The light-colored quartz monzonite (granite) that forms the majority of the canyon walls intruded as magma and hardened underground about 31 to 30 million years ago.

The buff-colored quartzite, brown shale, and black and white limestone seen in the upper third of the canyon record the advances and retreats of multiple, long-lasting oceans present between 540 and 330 million years ago. Originally layered horizontally from oldest to youngest, these rock layers have been disarrayed by folding, tilting, and faulting.

Located at the head and along the eastern ridge line of the canyon is another intrusive igneous rock. This magma body intruded about 35 to 33 million years ago and hardened into a granite-like rock called granodiorite. Both intrusives in this canyon aided in creating the rich mineralization found in Little Cottonwood mines. Numerous mine dumps dot the mountainsides surrounding Alta, evoking images of the once-lively mining district. 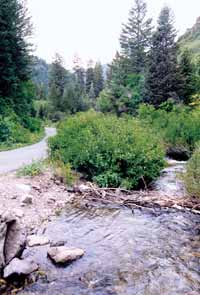 The oldest rocks in Mill Creek Canyon are visible from the road only by looking through the trees toward the south ridge skyline. These rocks are part of the Mississippian- and Pennsylvanian-age formations including Deseret and Round Valley Limestones and Humbug and Doughnut Formations.

The Pennsylvanian Weber Quartzite, originally a sandy marine beach, is common in the canyon particularly at its western end and mouth. Locally, the brown quartzite was dramatically folded and crushed by thrust faulting during the Sevier Orogeny about 85 million years ago.

The Triassic Woodside Shale is a reddish siltstone and fine-grained sandstone deposited in layers up to several inches thick. The Woodside Shale is exposed in road cuts partly covered by vegetation near mile 6.8 and the Clover Springs Picnic Area.

The Triassic Thaynes Formation contains abundant marine fossils such as corals, shells, and other marine animal parts on trails north of Camp Tracy scout camp. The most visible feature of this gray limestone is a massive limestone ridge that juts above vegetation on the north side of the canyon. The massive limestone meets the road at mile 5.5 where the road makes a sharp turn to the southeast.

The Triassic Ankareh Formation and Jurassic Nugget Sandstone are the youngest bedrock units in this canyon. They are seen near the northern-most ridge skyline of the canyon, and red Nugget Sandstone boulders are in debris-flow gravel near mile 4.8.

During the recent Ice Age, glaciers carved some of the upper Mill Creek tributaries and deposited moraines, such as the one seen at mile 7.1. Glaciers did not flow down the main canyon, thus, the canyon maintains the characteristic “V-shape” caused by stream erosion.