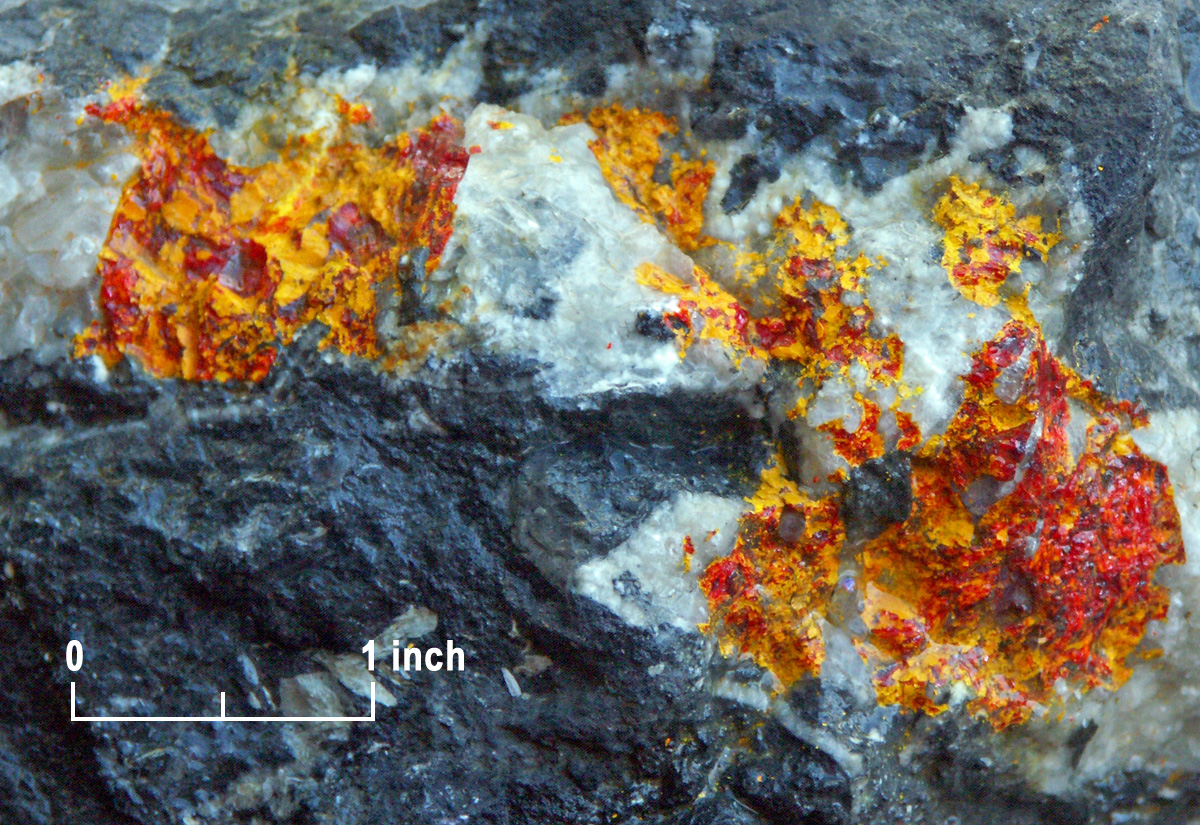 Sample of Mercur gold ore showing orpiment (orange), realgar (red), and calcite (white) in dark gray limestone. Mercur is the original “invisible gold” deposit and was discovered more than half a century before the Carlin trend in Nevada, from which the invisible gold deposit model takes its modern name (Carlin-type gold deposits).

Historically, most gold has been produced from veins, placers, or as a by-product from base metal mines. However, in the early 1960s a new type of gold deposit was recognized at Carlin, Nevada. These Carlin-type sedimentary-rock-hosted gold deposits are unique in that the gold occurs primarily as microscopic particles disseminated in dark-gray to black, platy, carbonaceous, silty limestone. The gold grains are too small to see with the naked eye or even a magnifying hand lens (generally less than 0.0002 inch across), and eroding gold deposits do not form placers that a prospector could identify in the field. What was not recognized until 1968 is that the gold deposits at Mercur, Utah, which had been successfully mined in the 1890s, also belong to the Carlin deposit type.

The Mercur mining district lies on the southwestern flank of the Oquirrh Mountains in eastern Tooele County. The district was originally organized in 1870, and the initial production was from high-grade silver pockets. However, this early boom quickly faded and the camp was reorganized and renamed Mercur after a cinnabar (mercury sulfide) discovery in 1879. In 1883, a “gold ledge” was discovered, but the gold could not be recovered economically (because the grains were too small to concentrate) until the mine began using the “new” cyanide process in about 1890. In 1897, the 1000-ton-per-day Golden Gate mill at Mercur was the largest cyanide mill in the U.S., and it operated very successfully until about 1913 when decreasing gold grades from the mine made the operation unprofitable.

The history of the Mercur camp is enriched by a couple of important figures who were there during this 1890 to 1913 boom period. George H. Dern was general manager and superintendent of the Mercur Gold Mining and Milling Company and later the Consolidated Mercur Gold Mines Company. Dern went on to positions with mining companies in the Park City, Tintic, and Little Cottonwood mining districts before becoming the two-term governor of Utah from 1924 to 1933. Daniel C. Jackling was the metallurgical and construction superintendent of the Golden Gate mill, which was one of the first successful cyanide mills in the U.S. After his success at Mercur, Jackling (1) was a founder of the Utah Copper Company (Bingham), (2) became president of Kennecott Copper Company, (3) was recognized as the “father” of open pit copper mining, (4) developed the “Jackling porphyries” in Utah, Arizona, New Mexico, and Nevada, and (5) was inducted into the National Mining Hall of Fame.

Production from the Mercur district after 1913 was minor and intermittent until continuous gold production resumed with increased gold prices from 1933 until 1942. Then the U.S. government closed all gold mines (Order L-208) to conserve manpower and materials for World War II. Following the brief mining of some silverrich silica flux for the Garfield copper smelter at the north end of the Oquirrh Mountains, production in the Mercur district ceased again in 1945.

In 1968, Newmont Mining Corporation recognized the similarity of Mercur to their Carlin gold mine, indicating that Mercur was a Carlin-type deposit. They acquired the old Marion Hill and Sacramento mines as well as adjoining areas in the southern part of the Mercur district. Newmont drilled a series of unsuccessful exploration holes before dropping their interest in the district. Gold Standard, Inc., then consolidated the major land holdings in the central part of the district in the early 1970s, including some property owned by Charlie Steen, Utah’s uranium king, and sold the property to Getty Oil Company in 1973. Getty revived production in the old camp, following the escalating gold price, in 1983 with a large open pit mine–heap leach operation. Barrick Gold Corporation acquired the mine in 1985, an autoclave was added in 1989 to improve gold recovery, and the mine produced over 100,000 ounces of gold per year until 1995 when the economic reserves were exhausted. Currently, the mines are nearly completely reclaimed.

The Mercur gold ores are largely confined to a sequence of black, thin-to medium-bedded, carbonaceous, fossiliferous, and iron-rich limestone, calcareous sandstone, calcareous siltstone, and shale. Most of the mineralization in the Mercur district is concentrated near the crest of the Ophir anticline and localized near an east-northeast-trending set of normal faults. The most obvious alteration associated with the gold ores in the Mercur district is the extensive silicification (jasperoid) at the base of the Mercur member. The individual gold deposits occur as lenses associated with the destruction of carbonate minerals (decalcification) and clay alteration of the limestone host rocks above this basal jasperoid. The most common minerals associated with the gold ore are pyrite, marcasite, orpiment, realgar, barite, stibnite, cinnabar, and a few very rare thallium minerals.

The Mercur district ultimately produced about 2.5 million ounces of gold, making it Utah’s largest primary gold mining district, despite the fact that no gold was ever recognized in hand specimen. The price of gold during the years Mercur was recently in production ranged from under $300 to about $450 per ounce. It is too early to tell if the current $1000 per ounce gold price will again revive the original sedimentary-rock-hosted gold mines at Mercur.