Great Salt Lake may ebb and flow, however its current low levels give impetus to talk about water use, and how to use it more wisely in the desert. Andrew Rupke, a minerals specialist here at UGS, joins the conversation in this article. Check it out!

Not many states have a defining natural feature that locals actually discourage visitors from seeing.

Day 3 of our #EarthScienceWeek was great! The Utah Geological Survey hosts hands-on activities for school groups during October. Here, students learn a little gold panning history, and pan for some mineral treasures themselves! While no gold was included in the panning station, kids found pyrite, magnetite, fluorite, malachite (a copper bearing rock), and some azurite (a copper bearing rock)! You don’t have to drive to the Sierras for exceptional gem-hounding or big-wall rock-climbing. Southern Utah’s pristine Mineral Mountains just west of Beaver will fulfill any stone enthusiast’s yearning for rock.

Tar sands development often conjures images of a bleak northeast Alberta landscape, scraped and scalped of its vegetation after being converted to sprawling strip mines from which much of Canadian oil imports to the United States originate.

But if a proposal by Alberta-based Earth Energy Resources survives environmentalists’ appeal, eastern Utah’s canyon country could become a backdrop for the only tar sands mine in the United States.

In 2009, Utah mining regulators approved EER’s proposed PR Spring Mine on state institutional trust land in Uintah and Grand counties northwest of Grand Junction, Colo. If the mine is successful, it could prove the viability of a Utah tar sands industry, possibly bringing a new level of energy development to the Colorado Plateau.

Tar sand, also called oil sand, bituminous sand or asphaltic sandstone, is oil-laden sedimentary rock most commonly extracted in Canada. Utah’s tar sands, however, are generally half as rich as Canada’s and require more processing to extract the oil.

The push to develop tar sands in Utah is a fairly recent phenomenon.

Determined to find a way for American oil shale and tar sands to become sources of domestic energy production, Congress required the U.S. Department of Energy to start up a tar sands and oil shale leasing program as part of the 2005 Energy Policy Act.

In 2008, the DOE completed an environmental study of its tar sands and oil shale program, outlining 11 potential tar sands development areas in Utah, the only state in which tar sands are thought to be economically recoverable. 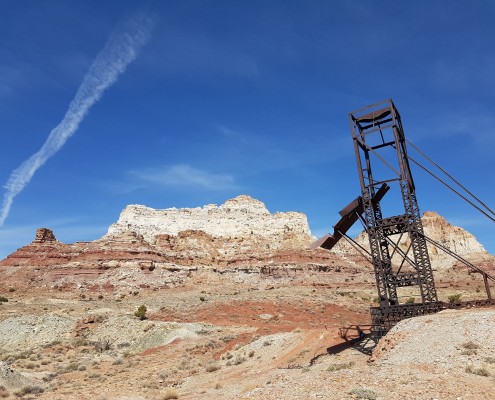