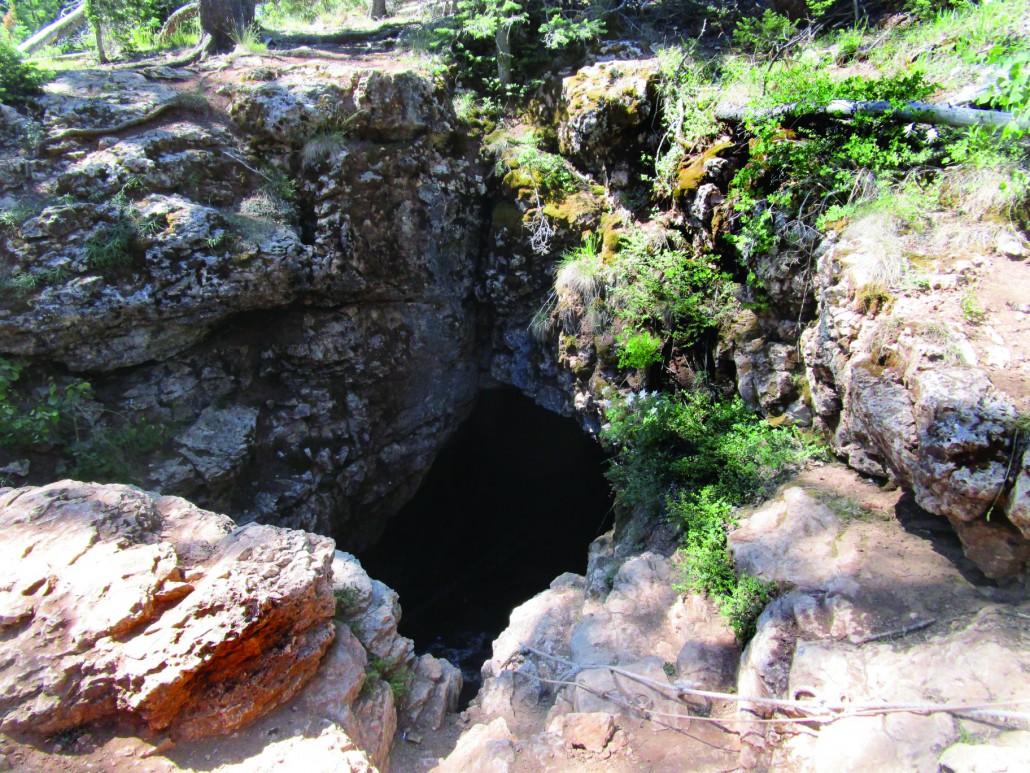 Ice caves are caves in bedrock that host year-round ice. They differ from caves formed within ice, which are designated glacial caves. Ice caves are exceptional because they are not only scarce, but they are located far outside zones of permafrost—at low elevations (near sea level) and low latitudes (between around 30° and 70°), where they maintain a much lower average annual temperature than that of the air above. How cold temperatures persist in these spaces is a matter of cave geometry; the physical properties of air, water, and rock; the weather; and time. In Utah, ice caves are well developed in limestone caves and sinks in the Bear River Range, Uinta Mountains, and other areas such as talus slopes and lava flows.

American explorer Edwin Swift Balch (1856–1927) attributed much of the cause of ice caves to The Winter’s Cold Theory, the idea that the cold of the winter perpetuates through the summer. Balch took the presence of ice at the entrance of caves as evidence for the theory, noting that cold winter air is a requirement for ice cave formation and that ice had never been found beyond 200 meters (650 feet) from the entrance of a cave or deeper than 150 meters (490 feet). Therefore, the presence of year-round ice was due to capture and retention of cold from the previous winter rather than any natural processes operating in the cave.

Ice caves are differentiated into two types by air flow and cave structure: static ice caves and dynamic ice caves. Static ice caves flood with cold air in winter and have little air circulation in the summer, with the chilly, dense air settling in and remaining stable. Entrances in these caves are higher than the downward-sloping body of the cave and are referred to as “cold sock,” “cold pocket,” or “cold trap” caves. Conversely, dynamic ice caves have low entrances, an upward-sloping body, and conduits to the surface at the top of the cave. Dynamic ice caves are cooled by the “chimney effect,” where cold air is sucked up the entrance in winter as warm air exits the above conduits. Air flow is reversed in summer as cold air drains downslope out the entrance and warm air is drawn in through the higher conduits. The result is a continuous annual draft of cold air at the lower section of the cave. Dynamic air circulation also produces freezing talus slopes, which can be thousands of feet below areas of permanent ice.

Ice formation requires a source of water. Fractures and fissures in the bedrock allow water to seep in and freeze, or precipitation or runoff enter directly into the cave or sink. Masses of ice and snow in the cave from previous winters thwart rising temperatures in summer, as available heat energy is sunk into melting or sublimating the ice (latent heat) and warming water (specific heat) rather than warming the cave air. Once a cave builds up a sizable mass of ice and a large volume of the surrounding bedrock becomes cold, thermal inertia propels frigid temperatures through the heat of summer.

Duck Creek Ice Cave, formed in a sinkhole on the Markagunt Plateau, is an example of a cold trap ice cave. Duck Creek is small and, although always cool, does not quite meet the strict definition of an ice cave, often melting out in late summer. Similarly, the namesake of Ice Cave Peak in the Uinta Mountains, previously containing multiyear ice, has reportedly melted out. A classic disappearing stream, Big Brush Creek Cave, estimated at nearly 5 miles in length, is not just a cold air sink but a water sink consuming Big Brush Creek into its lengthy passageways. The Vernal Express wrote in 1893 “. . . it is called the Ice Cave because all summer long the entrance, to a depth of several hundred yards, is half filled with glittering ice . . .” During years of torrential spring runoff, the heat from floodwaters melts all the ice in the cave. An immense bluish ice column just inside the entrance has endured through multiple years in historical times, reported in August 1899 in the Salt Lake Herald as being “eight feet in diameter and reaches from the ceiling to the floor” and “would perhaps remain forever were it not for the rush of an occasional flood, which sweeps it away and into the depths below.”

Ice has been reported beneath talus slopes in the Wasatch Range and Wasatch Plateau, and in the blocky lava flows of the Black Rock Desert. An extraordinary example is in the Ice Springs lava flow “cave” in Millard County where the annual mean air temperature is around 52°F, but the surface temperature of the dark basalt can exceed 140°F in summer. In his 1890 monograph, Grove Karl Gilbert labeled this the “Natural Ice House” and observed ice there in late September. Gilbert hypothesized the ice was a result of (1) accumulation of cold water from melting snow, (2) protection from the sun by “a heavy cover conducting heat poorly,” (3) shelter from wind, and (4) evaporation. Much of the causes of the Ice Springs ice cave can be attributed to the “Balch effect,” where flattish areas with coarse, blocky materials can have ground temperatures that are more than 10°F cooler than the surrounding mineral soils. Winter air descends into the spaces between the blocks, displacing lighter, warm air. In the summer the cold air remains in the spaces between the rocks. The Ice Springs cave has been without ice at times, however, as reported by the Millard County Chronicle on September 10, 1942, as dry and bare as “Mother Hubbard’s Cupboard,” with the Chronicle later reporting 36-inch-long icicles on April 22, 1948.

Akin to ice in blocky fields, humans have reproduced the conditions to make ice in places where the thermometer never dips below freezing. Allahabad, India, has no frost days, but ice was created in winter under the favorable weather of a clear night (for radiative cooling) and a dry, light northwest wind (to utilize the latent heat of evaporation). With these conditions met, small, porous earthen jars were placed on a thick bed of loose, dry rice straw for insulation in a 2-foot-deep hollow dug in the soil. The jars were filled with water, placed 6 inches below ground, and covered with mats. In the morning, thin films of ice were collected from the jars and stored in an ice house. An ice crop could be harvested when overnight temperatures dipped below 52°F. The Indian ice industry thrived in the early 19th century until supplanted by the cheaper, higher-quality New England ice, or “crystal blocks of Yankee coldness,” cut from the coastal ponds of Massachusetts and shipped to tropical ports around the world.

Humans have also unintentionally recreated ice caves as tunnels, mines, shafts, and wells. The Salt Lake Mining Review wrote in 1916 of an ice tunnel near the divide between Little Cottonwood and American Fork canyons known as the “North Pole.” In winter and in summer, the old mine tunnel had a “solid wall of ice.”