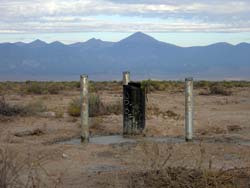 Objectives included (1) determining baseline water-level and chemical trends as a basis for evaluating possible future changes in local and regional ground-water flow systems, (2) establishing ground-water monitoring wells near the planned pumping wells to assess their potential impacts on ground water in Utah, (3) establishing monitoring of discharge from selected springs, (4) conducting aquifer tests to measure the capacity of the aquifers to transmit and store ground water, and (5) evaluating regional flow patterns in the deep carbonate aquifer from Snake Valley to Fish Springs National Wildlife Refuge, based on water levels, isotope and tracer geochemistry, and geologic framework.

The network includes wells and spring gages in Snake Valley, and wells in Tule Valley and Fish Springs Flat. We installed new monitoring wells at 27 sites, including one to four boreholes per site and one to five piezometers per borehole. Sixty-six of the new piezometers are equipped with pressure transducers that measure water levels hourly. We also placed transducers in ten pre-existing wells. Eleven surface-flow gages are in place at six springs, and sixty shallow (~3 feet) piezometers are installed in wetlands in the outflow areas of springs.

We installed flow gages at large-discharge springs that could be impacted by future ground-water development. These springs have relatively large water rights on record and/or their outflow areas provide habitat for sensitive aquatic species. In all, 11 gages are in place at 6 sites and the real-time data are streamed to Department of Natural Resources via radio telemetry.

UGS assisted with installation of 60 shallow piezometers in five spring-outflow areas as part of a U.S. Environmental Protection Agency-funded project to establish baseline physical habitat conditions of wetlands in Snake Valley. This work, installation of nested piezometers, and surface gaging were done in coordination with the Utah Division of Wildlife Resources, which monitors the populations of sensitive aquatic species in the spring pools and wetlands.