There is a 57% probability (over 1 in 2 chance) that a magnitude 6.0 or greater earthquake will occur in the Wasatch Front region in the next 50 years. To address this threat, the Utah Earthquake Program (https://ussc.utah.gov/pages/help.php?section=Utah+Earthquake+Program) consisting of the UGS, UUSS, and the UDEM, developed the map so the public could more fully understand the hazard from earthquakes and faults, as well as the resulting risk to property, infrastructure, and life safety in Utah. Users of the map will be able to determine past earthquake locations and relative magnitudes (size), along with the locations of active faults and the timing of their most recent movement.

Printed copies of the map are available for $15 at the Utah Department of Natural Resources Map & Bookstore (http://mapstore.utah.gov). The map is also available as a PDF download at https://ugspub.nr.utah.gov/publications/maps/m-277.pdf (44 by 62 inches in size) and can be printed on a wide-format printer.

Additional information on the hazard and resulting risk from earthquakes is available at https://geology.utah.gov/hazards/earthquakes-faults/, from the Utah Seismic Safety Commission at https://ussc.utah.gov, and at the agency websites: 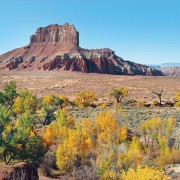