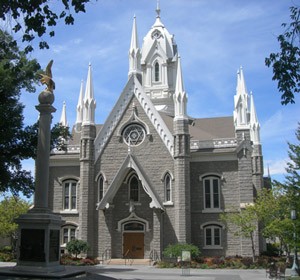 Assembly Hall was built between 1877 and 1882 with quartz monzonite left over from the temple construction.

This attractive building was constructed between 1877 and 1882 using discarded stone from the temple construction. The roughness and irregularities of the quartz monzonite give the building its rustic exterior finish.

Its open interior arrangement is similar to that of the Tabernacle and includes a baroque pipe organ. This building is used for LDS church meetings and public concerts and lectures.

Quartz monzonite and other granitic rocks were formed by crystallization during cooling of a hot molten mass, or magma. This molten material originally rose from great depths and intruded the rocks in the upper part of the earth’s crust.

As the material slowly cooled and hardened, crystals of quartz, feldspar, mica, and other minerals formed. These crystals are interlocked and held together like the pieces of a complex 3-D puzzle. The slower the magma cooled, the larger the crystals grew.