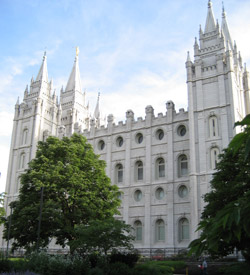 The gray, granite-like stone (quartz monzonite) used to build the cathedral-like Salt Lake City LDS Temple was quarried at the mouth of Little Cottonwood Canyon, about 20 miles to the southeast in the Wasatch Range.

Temple construction began in 1853, six years after the first influx of Mormon pioneers (members of the LDS Church) entered the Salt Lake Valley, and was completed 40 years later in 1893.

Workmen cut the stone from enormous boulders at the base of Little Cottonwood Canyon and initially hauled the three-ton blocks from the canyon to the temple site by ox teams, making the trip in three to five days. The blocks later traveled by rail cars after completion of the railroad and a branch track to the quarry in 1873.

Inspired by LDS scripture, carved religious symbols and inscriptions encircle the temple, including moon-stones, sun-stones, earth-stones, cloud-stones, star-stones, and the all-seeing eye and the clasped-hand motifs. Seven stars depicting the constellation Ursa Major (the Big Dipper) are carved on the west center tower.

Only the recommended faithful of the LDS church can enter the temple, and only by an underground tunnel from the Temple Annex, the building located north of the temple. The main temple doors are sealed awaiting Jesus’ second coming.