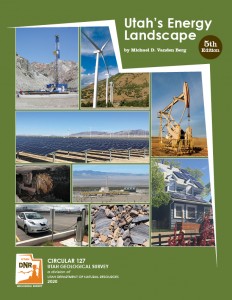 PRESS RELEASE: From renewable resources to conventional fossil fuels, data highlighted in new publication will serve as a baseline for comparison with COVID-19 energy-related impacts

Salt Lake City (May 4, 2020) — Utah is fortunate to have abundant and diverse energy resources including fossil fuels like coal, oil, and gas, as well as renewable resources such as solar and wind. A recently released report by the Utah Geological Survey (UGS) highlights Utah’s energy landscape as it continues to evolve and the balance between fossil fuels and renewable energy changes.

The most noteworthy recent trends include the following: 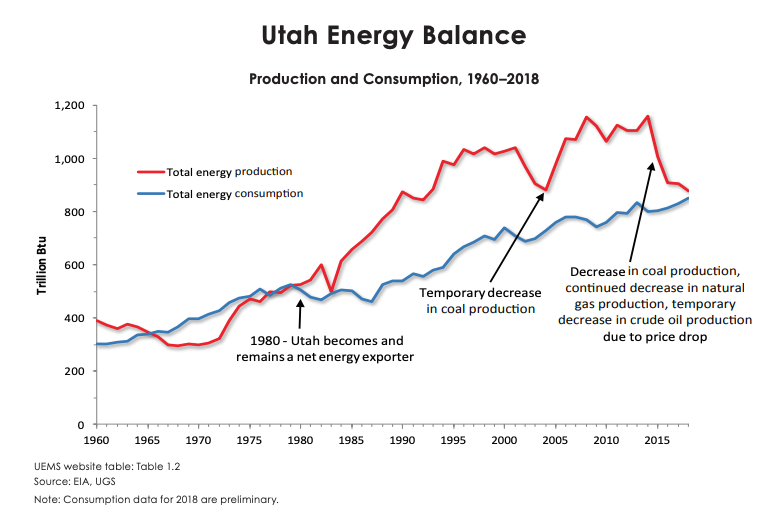 Among these recent trends, crude oil prices have been most severely impacted by the COVID-19 pandemic, the effects of which are not covered in this report but are updated in the attached Fact Sheet. Starting in March 2020, demand for petroleum products fell sharply due to travel restrictions. This drop, coupled with an oil price and supply war between Saudi Arabia and Russia, has greatly eroded the global price of crude oil, and will have dramatic consequences for Utah in the second half of 2020 and into 2021.

This price decline resulted in all drill rigs leaving Utah as of May 1st. In addition, many current oil wells will be shut-in. Overall crude oil production in Utah could drop by 20% in 2020 with a further decline of 10% in 2021. Natural gas production, already in decline, will continue to fall as production of associated gas, produced from oil wells, decreases.

Demand for petroleum products in Utah could also decline by 20% or more, resulting in lower refinery production. A positive for consumers, motor gasoline and diesel prices will continue to significantly decline. In addition, Utah will most likely see minor increases in residential electricity use as Utah’s workforce telecommutes, but these increases will probably be offset by decreased demand in the commercial and industrial sectors.

Before COVID-19 dominated the headlines, Utah produced $4 billion worth of energy in 2018, and energy-related employment climbed to 15,010 in September of 2019, the majority of which (25%) came from the oil and gas sector. The energy sector employees earn nearly double the statewide average annual wage. Additional employment comes from renewable energy construction and energy efficiency, and employment in multiple energy sector support industries, which are included in other federal reporting categories.

Consumption of petroleum products reached record levels in 2019 as prices remained relatively low. Consumption of natural gas is also expected to increase to record highs.  Utah’s electric energy consumption growth slowed significantly due mainly to increases in energy efficiency and  increases in rooftop solar, which offsets demand from power plants. Utah will continue to be a net-exporter of energy by producing more natural gas, coal, and electricity than is used in the state. However, Utah will remain reliant on other states and Canada to satisfy its demand for crude oil and petroleum products.

Between 2015 and 2019, 914 megawatts (MW) of new utility-scale solar capacity came online in Utah―more than wind, hydroelectric, geothermal, and biomass combined. This surge also occurred in the residential sector, with total capacity increasing from just 7 MW in 2013 to more than 212 MW in 2018.

Coal production in Utah rebounded to 14.3 million tons in 2019 as the foreign export market continued to grow, offsetting lower demand at regional power plants and industrial facilities. Production of electricity has decreased 15% in the past 10 years, mostly from coal-fired power plants. Natural gas-fired power plants and renewable resources have greatly increased their share of total generation.

Despite the COVID-19 crisis, coal production in Utah is expected to remain in the 14- to 15-million-ton per year range, at least until the Intermountain Power Plant converts to natural gas and hydrogen in 2025―removing an additional 3 to 4 million tons from the market. In the past few years Utah delivered moderately more coal to foreign markets, and potential remains for access to a strong overseas market, which could push production slightly higher in coming years.

Utah’s electric generation portfolio continues to evolve as demand for carbon-neutral electricity increases and several new utility-scale solar farms are installed in 2020 and beyond. This intensified emphasis on carbon-neutral energy has spurred research and development into:

UGS Circular 127, Utah’s Energy Landscape – 5th Edition was created in collaboration with the Utah Governor’s Office of Energy Development (OED), whose mission is to implement State Energy Policy and the Governor’s energy vision that supports affordable, reliable, diverse, and cleaner energy options. Recognizing the value of current energy data in charting our path forward, OED is proud to have provided funding via the federal State Energy Program to the Utah Geological Survey to produce this report.

Utah’s Energy Landscape – 5th Edition is available (PDF) for free from the UGS website at https://ugspub.nr.utah.gov/publications/circular/c-127.pdf    Print-on-demand copies are available for purchase from the Natural Resources Map & Bookstore, 1-888-UTAHMAP, www.mapstore.utah.gov.

The COVID-19 Pandemic’s Impact on Utah’s Petroleum Industry Fact Sheet is also available for download from the UGS website at https://ugspub.nr.utah.gov/publications/circular/c-127/factsheet.pdf